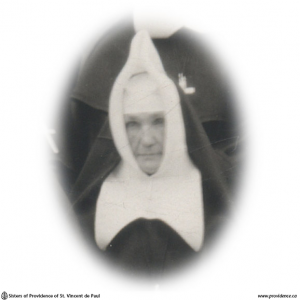 On March 9, 1936, Sister Mary Michael (Mary Houlahan) with startling suddenness was called to her eternal reward, at the House of Providence, Kingston.

During the entire religious life Sister was a model of fervour and generosity. She had a gentle, refined and gracious manner. Most of her years were spent in the active service of the poor and sick and it was this occupation which seemed to give scope to the beautiful traits of her character.

For a number of years she was portress at St. Vincent de Paul Hospital, Brockville. In her dealings with the public, Sister M. Michael made many friends for the Institute.