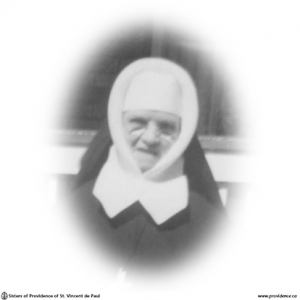 On May 6, 1982, Sister Mary Mildred died at St. Mary’s of the Lake Hospital at the age of 93 years and 9 months. Retired at the Marian Infirmary, Heathfield, since 1973, Sister suffered a severe stroke in August, 1981. After a few weeks at Hotel Dieu Hospital, she was transferred to St. Mary’s where she lingered, a helpless invalid, for eight months. During these long months it is doubtful if she was ever fully conscious.

Sister Mary Mildred, Mary Catherine Boyd, was born in Prescott, Ontario, on July 19, 1887, the eldest daughter of John Boyd and Sarah Ann Burns, long-time parishioners of St. Mark’s Parish. The pastor at the time Sister applied for submission to the Community, Rev. John Masterson, wrote, “I have known Katie Boyd all her life and all I know of her is good. She is one of a large family and her parents have given their children every possible advantage.” One of the advantages Mary Catherine enjoyed was training in music from a competent teacher in Ogdensburg, a training, however, which she did not follow up.

She entered the Novitiate on March 17, 1914, and made Profession on July 1, 1916. When writing her necrology we are reminded of a remark made by a Sister contemporary of St. Therese of Lisieux when the saint was dying, “What will Mother have to say about her?” Sister Mary Mildred’s religious life was a hidden one. She spent her first years with the smaller children at St. Mary’s of the Lake Orphanage and Sisters who worked with her speak of her kindness to these little ones. The remainder of her long active life was devoted to the care of the aged men at Providence Manor.

Of a retiring disposition, she made few close friends, but residents who worked with her in the Occupational Therapy Department at Providence Manor during her years of semi-retirement inquired about her and visited her at Marian Infirmary. One Sister remarked of her, “She was devoted to her work; she looked for no privileges of visits or vacations.”

Her declining years were lonely. Her sight was seriously impaired so that she could not read; her mind was frequently confused, and she would often repeat, “I want to go home to my mother.” Yet, when you visited her and teased her about the pretty robes she was always wearing, she would forget her anxiety and laugh with you. The only other surviving member of the large Boyd family was a sister, Mary, a one-time Queen’s student and a graduate of Ottawa Teachers’ College. She is now a resident at Providence Manor and so crippled with arthritis that it was an effort for her to come to see Sister.

The funeral Mass was concelebrated on May 8 by His Grace Archbishop Wilhelm and Father Dan Ryan, chaplain at Heathfield.