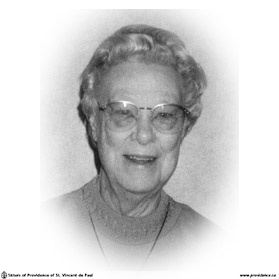 Mary Catherine was the second of five children born to William Moderwell and Catherine Casey on January 14, 1919 in Edmonton, Alberta. Four girls and one boy were a happy family in spite of the hardships of the “dirty thirties”. Her brother, Ken, was a pilot in World War II and was shot down over Crete at the end of his second tour of duty. Her sister, Jessie, was hit by a car and killed in January of 1995.

Mary attended Catholic elementary and secondary schools in Edmonton. After graduating from St. Mary’s High School, she attended the Edmonton Normal School and then taught in two rural areas and in Edmonton.

Mary entered the Postulancy of the Sisters of Providence on August 15, 1946, and was sent to teach four primary grades in the two-room school at Portsmouth. During this time, she lived at St. Mary’s of the Lake Hospital during the week and returned to the Motherhouse for the week-end for classes. As soon as her Canonical Year was completed, she was sent to St. John’s School to teach a grade 2 – 3 class.

Then came a move to Alberta in 1951 with an assignment as principal of St. James’ School and to teach grades 3 – 6. The following year the new St. Peter’s School opened, where besides the principalship, she taught a large class of grades 3 – 6.

With both Ontario and Alberta certificates, it was back to Ontario in 1958. This time she returned to Holy Rosary School to teach some of her former students now in grades 6 and 7 and to teach music in several other classrooms. Those were full days as, after school, she helped clean the church, taught the altar servers and a children’s choir. On the weekends she laundered and ironed the church linens.

Two years later and partly due to poor health caused by waiting in the cold to take buses, she was transferred to Kingston to live at the Motherhouse and taught grades 4 and 5 at St. Joseph’s School for twelve years. Poor health eventually caused her to cease her teaching profession which she had enjoyed in spite of struggling with migraine headaches for many years.

In the autumn of 1971 she was sent to St. Anthony’s Home in Moose Jaw to take charge of the Activities Department. However, this lasted only nine months when she was summoned to go to Camrose, Alberta to work in the admitting office at St. Mary’s Hospital, later adding the job of administrative secretary and for the last three years of nine years there as superior of the convent. She also served on the governing board, volunteered for the Crisis Line, and was eucharistic minister at St. Francis Church.

In 1981 she had a sabbatical year to attend “Credo” at Gonzaga University in Spokane, Washington which ended with a month-long trip to the Holy Land.

Another change came when she was asked to take a pastoral care course in preparation for a new assignment as Director of Pastoral Care at Holy Family Hospital in Vancouver, B.C. After four years there she was sent to St. Joseph’s Hospital in Edmonton, Alberta.

Apart from her many ministries, Sister had many interests and gifts. She enjoyed listening to classical music, reading, doing cross-word puzzles, crocheting, knitting and sewing and many crafts. Over the years she has made many banners for several chapels and churches as well as crocheted many altar cloths and trimmed other church linens.

Mary was called home to her loving God on April 1, 2006 at the Royal Alexander Hospital in Edmonton, Alberta. The Vigil Service was held Monday, April 3, at 7:00 pm. at St. Andrew’s Church in Edmonton, Alberta. The Mass of Christian Burial, held at St. Andrew’s Church on Tuesday, April 4 at 10:30 a.m., was presided over by Reverend Vic Perron. The Rite of Committal was at St. Joachim’s Cemetery, Edmonton. A vigil service for Mary was held at the Motherhouse on April 4 at 6:30 p.m.

Sister Mary is survived by her sisters, Nora (José) Gallardo of Oaxaca, Mexico and Anna Moderwell of Edmonton, Alberta.