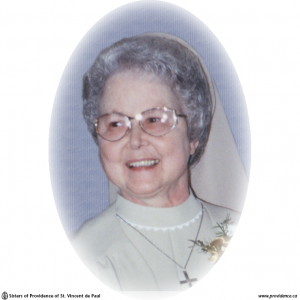 Dorothy Margaret Katherine LeGrand was born on October 27th, 1928 in Montreal, Quebec, to Herbert LeGrand and Katherine Sheahan-St. Aubin. She had four brothers, and one sister. Dorothy was the youngest. When she was three years of age, her mother was killed in a car accident. Her mother’s sister, whom Dorothy describes as a caring and generous woman, moved into their family home with her husband to help her father raise his children.

She received her education in Montreal and when she graduated from high school she began nurse’s training at St. Mary’s Hospital. It was here where she first met the Sisters of Providence. She entered the Novitiate of Sisters of Providence of St. Vincent de Paul in 1947 and at her First Profession in 1949 she was given the name Sister Mary Mona.

After her Novitiate Sister Mary Mona continued to study nursing in Montreal but became ill and was hospitalized for a year at Providence Hospital in Moose Jaw, Sask. Upon recovery she completed Grade 13 in Belleville, Ontario which she called a wonderful year. She then returned to Montreal and spent a year at St. Malachy’s Convent when it first opened.

Sister then returned to St. Mary’s where she was sacristan for several years and attended to visitors and performed several other chores as needed. Sister eventually studied nursing again and graduated in 1963. From 1963 to 1988 Sister Mary Mona nursed at St. Mary’s Hospital, in the emergency department, and became nursing supervisor in Obstetrics. In 1967 Sister studied and received her BScN with a specialist in psychiatry. She returned to St. Mary’s and worked in the Psychiatric Crisis Clinic and with the Emergency Room Team. In 1973 she directed the opening of a new Emergency Psychiatric Crisis Clinic at St. Mary’s. She was given the freedom to plan, organize and set into motion this new clinic and was in charge of it for over 25 years. In 1974 Sister received a Diploma as a Remotivation and Community Mental Health Therapist from Concordia University. In 1976 she received a diploma in treating Alcoholism and Drug Addiction from Sherbrooke University. In 1983 she received a Masters in Educational Counselling and Psychotherapy from McGill University.

From 1972 to 1980 her father, her aunt, three brothers and her sister, brother-in-law and sister-in-law all died. Her last brother died in 1990. Also during this time three cousins and five of her closest friends died. Sister speaks of this time as painful but one in which: “I truly learned the meaning of detachment and trust in Providence.”

In 2004 Sister Mary Mona returned to the Motherhouse in Kingston because of ill health. In the summer of 2006 Sister received word that she had cancer of the bowel but opted to not have surgery and so became critically ill the morning of December 27 and was admitted to the hospital that day.

When Sister wrote her autobiography in 1995 she said, “I think we have a wonderful congregation, and whether alive or dead, I will always pray for and try to help the special members of it. Many of the Sisters have been so wonderfully kind to me – thanks for the memories, Sisters.”

Sister Mary Mona was called home peacefully to her loving God on Sunday, August 1, 2010. She is predeceased by her parents, her sister, Bernice Jerry, and her brothers, Donald, Leonard, Stewart and Edward.

The Mass of Christian Burial, held in the Chapel of Mary Mother of Compassion, Providence Motherhouse on August 5 was presided over by Friar Edward Debono, OFM Conv. Reverend Msgr. Don Clement delivered the homily. Other members of the clergy were also in attendance.