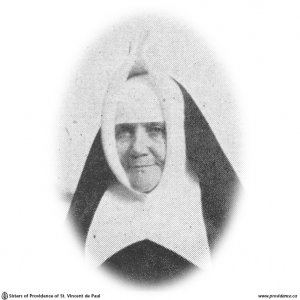 Entered the Novitiate of the Sisters of Providence at Kingston on January 9, 1907. Made profession February 9, 1909.

Took nursing training at St. Vincent de Paul Hospital, Brockville and was on the staff there for a few years.

In February 1913 went to Moose Jaw, Saskatchewan and was one of the six pioneers who carried on the care of the sick in a rented house for four years until funds were available for the erection of the first unit of Providence Hospital.

She served a term as Local Superior of Providence Hospital, Daysland, Alberta. In 1923 she was sent to Edmonton to take charge of the opening of St. Mary’ Home for boys and was the first Local Superior of that institution. In 1927 she was again assigned the task of opening a new mission and succeeded in transforming a dilapidated four-story boarding house into St. Joseph’s Hospital for the chronically ill in Edmonton.

In 1930 she returned east and two years later was appointed Local Superior of Maryvale Abbey, Glen Nevis, a boarding school for high school students. She was appointed Bursar at the Motherhouse, “Heathfield”, in 1935, and then spent a term as Local Superior of St. Mary’s of the Lake Orphanage. After a few years helping at St. Vincent de Paul Hospital, Brockville, she retired to the House of Providence in 1947 and four years of declining health were passed in this house where forty years previously she had made her novitiate. She died on July 27, 1951.