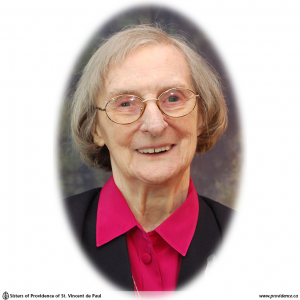 Mary Alma Murphy was born on February 28, 1918 in Chandler, Quebec, to Christine Mauger and Michael Patrick Murphy. Before she entered religious life, Mary worked as a stenographer for the Provincial Government in Cape Cove, Quebec, as a stenographer and book-keeper for the Gaspesia Sulphite Company in Chandler and finally for 18 years for the Canadian National Telegraph. She also took care of her aging parents until 1959.

Mary entered the novitiate of the Sisters of Providence of St. Vincent de Paul on February 2, 1961. Following her First Profession, she was assigned to assist the General Secretary of the Congregation then became Executive Secretary at the Father Dowd Home in Montreal for ten years. During this time she was appointed Superior from 1981 to 1983. From March 1983 until October 1984 she served as secretary to Archbishop Francis Spence, Archbishop of Kingston.

After completing the Pastoral Health Care Course in Ottawa, she ministered as a pastoral visitor at St. Mary’s of the Lake Hospital in Kingston. She then spent 4 months in Guatemala relieving one of the Sisters. From 1985 to 1996 she was the Co-ordinator of the Pastoral Care Department at St. Mary’s of the Lake Hospital. For the next 2 years she volunteered in the Pastoral Care Department at Providence Manor, Kingston. In the meantime Sister’s eye sight was failing to the point where she was registered with the CNIB in 1992 as legally blind. Sister Mary was an avid bridge player and loved music, knitting and sports. While she was in the infirmary she loved to have visitors and to hear about all that was going on.

On March 11, 2012 she was called home peacefully to her loving God. The Mass of Christian Burial, held in the Chapel of Mary Mother of Compassion, Providence Motherhouse on March 14, was presided over by Most Rev. Brendan M. O’Brien, Archbishop of Kingston, assisted by members of the clergy. Friar Ed Debono, OFM Conv., was the homilist.