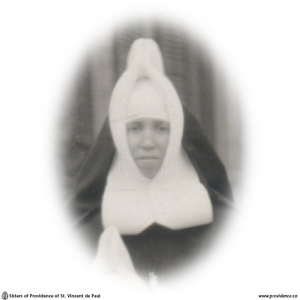 Sister Mary Norbert died suddenly of a heart attack on Saturday evening, March 4th, at St. Francis General Hospital, Smiths Falls. Although ill health forced her to retire from teaching three years ago, she was still active and able to help with light duties around the hospital, looking after the library and visiting the patients, until stricken a few hours before her death.

After the first attack of illness Sister was anointed, then rallied for awhile but succumbed later to a second bad turn, and died about 6.30 p.m. She was conscious to the last, blessed in a remarkable way in her dying moments by the many heavenly graces with which she was surrounded.

Sister Mary Norbert, the former Johanna Powell, was a native of Arnprior, and daughter of the late Henry Powel and Catherine Sullivan. She entered the Novitiate at St. Mary’s of the Lake, July 1911, and after profession attended Ottawa Teachers’ College. She taught in the separate schools of Glen Nevis, Brockville, Smiths Falls, St. John’s, Kingston, and the last 20 years in her native Arnprior, being local Superior there for 5 years.

Endowed with a fine sense of humour, always ready to brighten a conversation with funny tales and witty remarks, Sister was a pleasant companion at recreation and much beloved by her Sisters. The sick at the hospital appreciated any little service she could render, and were always glad of her cheery visits, and grateful for her many acts of kindness, as was evident in their sorrow by the many spiritual offerings contributed by them after her death for the repose of her soul.

On Monday, Requiem Mass was offered for her by Rev. J.J. Fogarty, P.P., at St. Francis Hospital, after which the remains were brought to Kingston. The following day Archbishop O’Sullivan offered solemn requiem Mass here in the Chapel of the Immaculate Conception, at the Mother House, Heathfield. His Grace was assisted by Msgr. Welsh and the Clergy from the Cathedral. Present at the Mass also were: Msgr. Lacey, Father A.J. O’Neill, Brockville, Fathers Dillon and Rice of Arnprior, Father Devine, S.J., Regiopolis College and Father O’Connor, Smiths Falls.

No immediate relatives survive; Sister was predeceased by two brothers and two sisters. Miss Catherine Mooney of Arnprior is a niece, and Sister M. Kathleen of the Grey Nuns, Pembroke, as well as Sister M. Richard, Heathfield, who attended the funeral are cousins of the deceased.