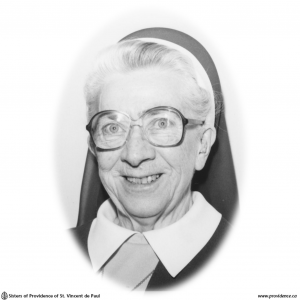 On November 5, 1909, Mary Ellen McGlade, one of eight children was born to Arthur Joseph McGlade and Catherine M. T. McCarthy in Perth, ON.

Mary Ellen entered the Sisters of Providence on January 6, 1931, but, after six months, she decided to return to her home in Perth. Scarcely had she unpacked her suitcases than a yearning and strong desire to return to the Novitiate to respond to her religious vocation prompted her to write to the Superior General with an admittance request. She re-entered on September 8, of that same year.

Mary Ellen made profession on August 15, 1933, taking the name of Sister M. Noreen.  Following profession, Sister completed Grade XII and XIII in Glen Nevis and then went to Ottawa Normal School where she obtained her teaching diploma. Sister’s successful teaching career began in 1935 in Trenton and for 32 of her 38 years in the classrooms she was principal in Trenton, Kingston, Prescott and Belleville. She was a very capable principal, was well loved and esteemed by her fellow teachers, did what had to be done and never shirked her duties. Several summers, during vacation time, sister taught religion in Bedford.

On the occasion of her retirement from teaching, sister was delighted to receive a thank you letter from Robin Jeffrey, the Mayor of Belleville, for the contribution she made to the teaching field. After her retirement in 1973, she worked as switchboard operator for 14 years at Providence Motherhouse.

Sister M. Noreen had a great love for children and always brought out the good in each child, challenging them through her kindness, her joy-filled spirit, her gracious rapport and her encouragement.

Sister always carried a twinkle in her eye and her positive motto was that life was worth living as she faced her class each morning. Her great sense of humour lightened the burden of school studies. Her dancing, singing and great sense of humour brought much joy to those with whom she lived and worked.

Because of Alzheimer’s disease, Sister M. Noreen had to be transferred to Providence Manor to live out the last few years of her life and it was there that she died on February 18, 1993, in the 62nd year of her religious life.

Archbishop Francis J. Spence, accompanied by several priests, presided at the funeral Liturgy at Providence Motherhouse, Kingston, and Monsignor J. G. Hanley delivered the homily. Her sister, Anne Hunter and several nieces and a nephew joined in the celebration of her life.