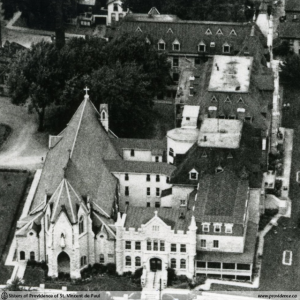 On August 10, 1946, Sister Mary of Calvary, who had been ill but a few days, died an early hour on Saturday morning, at the House of Providence, Kingston.

On March 25th, 1897, she entered the Novitiate and was professed in 1899. Sister was appointed to the nursing staff of St. Vincent de Paul Hospital, Brockville, which was her native place, shortly after her profession. For more than twenty years she devoted her time to hospital work until an injury to her hand obliged her to retire more or less from regular duty as a nurse.

Coming to Kingston, later, Sister made good use of her time and gave herself generously to her appointed duties. She worked faithfully in the men’s ward, sewing etc., to the last. Only in heaven can her charity and kindness to the aged poor and infirm, be correctly estimated.