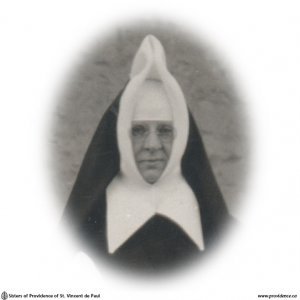 Sister Mary Carmel died at the Hotel Dieu, Wednesday, November 24th, after a short illness. She had not been feeling well for some time and an operation was advised to which she submitted as her best chance of recovery.

On November 12, she underwent the operation and for nearly two weeks afterwards she seemed to be doing remarkably well, when suddenly there was a change for the worse to her condition and the next day she died about 6 p.m. It was a great surprise to all. Death had claimed one of our best beloved Sisters.

Sister Mary Carmel, the former Margaret Anne Hallinan, baptized in Smiths Falls Church, was a native of Carleton Place. She entered the Novitiate in Kingston 1902. After her profession in 1904 until she was superannuated in 1946, she was engaged in teaching. She was especially skilled in primary work and had charge of Grade I classes in Prescott, Perth and in Trenton where she was at the same time local Superior for six years. After she retired in 1946 she spent two years Superior at the orphanage, “Heathfield,” but felt unable to continue, and resigned her charge before the end of the term. She then returned to the House of Providence and continued to aid in the printing room where she rendered invaluable service, proof-reading, etc., until her illness.

Sister was endowed with many amiable qualities which endeared her to her pupils and Sisters, but above all she was an edifying religious. She observed her fiftieth anniversary of profession on September 14th, but we trust Our Blessed Lady in her own Marian Year took this gentle flower home to celebrate more gloriously her golden jubilee in eternity.

The funeral took place from “Heathfield” on Saturday morning, 27th. His Grace Archbishop O’Sullivan sang Pontifical Requiem Mass in the Chapel of the Immaculate Conception. He was assisted by Monsignor Byrne and the Cathedral clergy. Burial took place in St. Mary’s cemetery. Our Reverend Chaplain recited the prayers at the graveside. May her soul rest in peace!