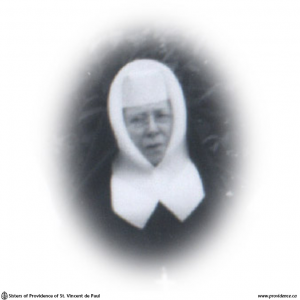 Eva Poulin was born in Toledo, Ontario, on January 21, 1886, the daughter of William Poulin and Winnifred Jane Corcoran. She was baptized by Reverend Michael Spratt, later Archbishop of Kingston. When she was six years old her family moved to Smiths Falls where her father conducted a dry goods business.

At the age of 21, Eva applied for admission to the novitiate of the Sisters of Providence and was earnestly recommended by her pastor, Reverend Thomas Kelly. “She has,” wrote Father Kelly, “distinct marks of a true religious vocation. Her piety and regularity of life here have been a source of much edification to me and to the people”.

Sister Mary of Lourdes, as Eva became at profession, confirmed her pastor’s opinion. During the sixty-five years she spent in the community her regularity of life, her co-operation with Superiors, her generous giving of self, her humility and patience were a source of edification to her sisters.

In 1964 she came to Providence Manor, and in spite of advanced age and impaired health kept active, serving for a few years as First Assistant to the Superior, and later looking after the chaplain’s dining room. She was most happy during these last years to have the companionship of her sister, Mrs. Cornell, six years her senior, who was a resident at Providence Manor and mentally alert at 92.

On January 12, 1972, on her way to her room at 9.00 p.m., Sister made a wrong turn in a dark hall, missed the light switch, and fell down eight or ten steps of a stairway. She did not lose consciousness, and was able to pull herself up to a landing and call for help. She was taken at once to hospital where it was discovered that two bones just below her knee were fractured. She was kept in hospital for three weeks and allowed to come to the infirmary at Heathfield. But the shock had been too much for her; she became confused and seemed in danger of contracting pneumonia. Once again she was taken to hospital for about ten days and returned to the infirmary. On March 12th the doctor brought her for the third time to Hotel Dieu to see if the cast could be removed from her leg, and she was so weak that she had to be admitted. It was evident that our dear old sister was nearing the end of her earthly journey. Sister Mary Hamilton visited her on the evening of March 23rd and asked the nurses to call her if they noticed any change. They called at 11 p.m. Sister went at once and remained until Sister Mary of Lourdes quietly breathed her last at 6 a.m. on March 24th.

The Sisters of Providence Manor asked to have Sister Mary of Lourdes’ remains left at their house for one night, as the residents wished to see Sister and pray at the casket of one they loved for her gentle manner and her many kindnesses to them.

The double funeral of Sister Mary of Lourdes and Sister Mary Blanche was held on March 27th. His Grace Archbishop Wilhelm and Monsignor Bernard Walsh of St. Joseph’s parish concelebrated the Mass with Fathers Buckley, Briceland and Esper of Brewers Mills present.

Sister Mary of Lourdes’ long religious life with years of service in both Eastern and Western Canada made her well-known to many sisters of the community and she will be remembered for her fidelity to duty, her many unostentatious services to the aged and sick – attending to their spiritual welfare, writing letters for them, etc. Her memory will be cherished by her Superiors for her loyalty to the Community and her uncomplaining acceptance of difficult tasks. When at the age of seventy-five she was leaving the Mother House to take over the superiorship of the distant mission of Athabasca in northern Alberta, Mother Jean, Superior General remarked to her: “We are sorry to have to ask you to go so far away”; she replied cheerfully, “Well, I made a vow of obedience”. Surely she will be richly rewarded for her generous co-operation with what she believed God was asking of her.