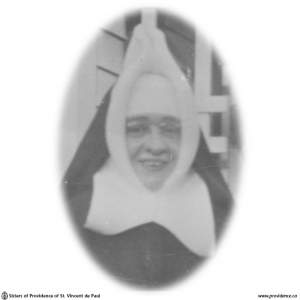 On Thursday, February 19, the Sisters of Providence lost a venerable religious in the person of Sister Mary of Mercy, who was in the sixtieth year of her religious life.

The former Margaret Corrigan was a native of Kingston, a daughter of Daniel Corrigan and Margaret Brady, in whose family of four sons and six daughters were four religious vocations. The late Rev. S.A. Corrigan of Kingston diocese, and three Sisters of Providence, Sister Mary Stanislaus, Sister Mary Aloysius and Sister Mary Mercy; three of her brothers were doctors and three sisters were nurses. Dr. Leo and Mrs. Costello (Pearl) are the only surviving members of the family.

After training as a nurse in St. Vincent de Paul Hospital, Brockville, Sister served the sick in that institution, and later in the hospitals at Smiths Falls, Camrose, Daysland, Montreal, and St. Mary’s of the Lake, Kingston. Sister M. of Mercy was particularly successful as a nurse in surgery and obstetrics, two departments of which she had charge during many years.

In 1951 she celebrated the golden jubilee of her religious profession while still on active duty at St. Mary’s of the Lake. Three years ago she retired to the Mother House, Heathfield, and was able to follow the exercises of the Community until stricken a year ago by the illness which confined her to the Infirmary. In the months that followed preceding her death, Sister suffered untold agony from sores breaking out over her body and feet, and even her mouth was involved preventing her for a time from receiving Holy Communion. However, during the last weeks and on the day of her death, Sister had the privilege of again being able to receive the Blessed Sacrament. Her death that morning (Thursday) was rather unexpected when about eight o’clock she suddenly suffered a severe haemorrhage, but rallied afterwards, then another, leaving her very weak. After that she quietly lingered while the Sisters prayed until she passed peacefully away about eleven o’clock.

Sister Mary of Mercy was a good religious, devoted to her community, and zealous for her perfection; yet, the fear of death never left her. This was for her a source of suffering, as well as a means of merit which we trust has earned for her an eternal heavenly reward.