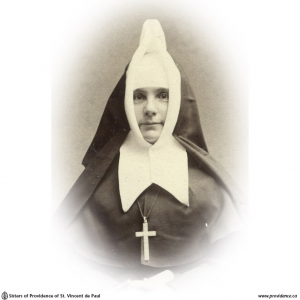 Briefly, but reverently is recorded in the necrologies of the Institute, (March 30) the life, virtues and death of our much-loved and lamented Sister Mary of Mercy, known to the outer world as Johanna O’Connor.

Born in Kingston, Feb. 29, 1848 of parents distinguished for their sterling faith and moral integrity; trained and educated under the best discipline of Catholic home and religious teachers, she early learned the all-important lesson that true happiness is to be found only in God’s service.

Possessor of many good qualities of mind and heart with a certain aptitude for household management, she rendered valuable assistance to her good Mother in bringing up a large family, and by her thoughtfulness and intelligence, sweetened the daily trials and anxieties experienced by her devoted parents. One of the most eventful periods in the life of the young girl, was the supervision of the house of her eldest brother, Rev. M. O’Connor, who was parish priest of Gananoque. Her qualifications admirably fitted her for so important a charge, which she wisely held for several years, until the dread visitant death, enfolded in its chilly embrace the zealous and pious young priest. Her sorrow was great but her heart quickly found relief in the hopeful assurance that she was now free to follow the vocation to which she felt called.

At the age of twenty-four resolving to detach her heart from all worldly vanities, she bid farewell to the paternal dwelling to enroll herself among the humble Daughters of St. Vincent de Paul, whose sacrificing lives and ardent zeal, in the service of the sick and unfortunate had strongly attracted her well-disposed heart. All her energies were devoted to serving and consoling the afflicted and the homeless ones of Christ, with that spirit of cheerful charity which was at a later period identified with her life.

The happy disposition of the postulant and the positive marks of vocation gained her admission to the Holy Habit six months after entrance, on the feast of St. Vincent de Paul, 1872.

With renewed spirit of docility and fervor, our active Novice directed all her usefulness to the interests of the Community. Conscious of her many faults she struggled onward, with unwearied zeal, to overcome habit by habit and attain the perfection necessary for her holy calling. Thus did she prepare herself for the sublime alliance with her heavenly Bridegroom, a celestial happiness she enjoyed on the feast of St. Joseph 1874. Her special devotion to the Blessed Virgin under the title of “Our Lady of Mercy” inspired her to assume that beautiful name at profession.

It can be truthfully said that the best years of her religious life, were spent on mission where she proved herself an earnest worker, and the actual extent of the good done as nurse cannot be estimated. In the sick room she was spoken of as an angel of peace and sweetness; always ready to minister to the sufferer, the medicines and attentions needed, with modesty, intelligence and fidelity, seldom forgetting to mingle devout aspirations to the heavenly Physician of all our ills.  Several of the more responsible offices in the mission houses were efficiently filled by our zealous Sister, such as bursar, Assistant, etc.

Her skillfulness with the needle and in the art of embroidery was highly proficient. Conspicuous around the Altars and sacristies of our Convent Church, are tributes of artistic work joyfully executed for the adornment of God’s holy sanctuary, and long will the memory of dear Sister Mary of Mercy as a perfect sacristan be cherished by her religious companions.

In the ordinary quests through the parishes, for the maintenance of the aged and orphans depending on the labors of the Sisters of Providence, she cheerfully, yes, generously, gave herself to these humiliating duties, and her cordiality and prudence among strangers on such occasions is truly noteworthy. As late as February 1900, one of these long and fatiguing trips was made through Smiths Falls, Merrickville and Kemptville. A very devoted brother, Rev. T. P. O’Connor being Pastor of the last named parish, the collection was so arranged that the supreme pleasure of spending a few days at his home might be her privilege. The long desired visit was appreciated and thoroughly enjoyed by our dear Sister.

At this time she had quietly passed her “Silver Jubilee” and although apparently possessing much youthfulness and vigor she was a victim of serious heart affection.  Several apoplectic spells had warned the Community that the termination of a life so ardent and useful would come unexpectedly.

One of the annual retreats was to open March 28, and her name was among the number, who would enter into holy solitude, but God had designed otherwise. On Sunday evening, the feast of the Annunciation, feeling greatly fatigued after removing the grand decorations, she obtained permission to retire earlier than usual. Her illness became serious and she was ordered to the Infirmary. The bursting of a blood-vessel in connection with the brain, rapidly decided her life to be in imminent danger. The announcement fell like a tremendous thunderbolt on the Community… the last Sacraments were administered and the members of her affectionate family summoned.  Fully realizing that very soon she must meet the God, whom she had so truly loved and served, she gave a parting advice to her grief-stricken and only sister, and peacefully resigning her soul, and she prepared religiously for death. Shortly after receiving the Holy Viaticum she lapsed into a comatose state which continued for thirty-six hours. The life closing scene of our dear Sister was soul-stirring and appealed to the sympathies of her religious companions. The great number of Sisters assembled at the Mother house for retreat, spent every free moment around her dying bed, pouring out fervent supplications to the agonized Heart of her Divine Spouse, in behalf of one who had for many years generously borne her share of the Community’s labors and hardships and whose boundless good-nature and cheerful disposition had gained their truest affections.  Her loving brother, Rev. Father O’Connor, remained constantly at the bedside assisting by absolutions and prayers his most affectionate sister and at 5 p.m. Friday, March 30, death relieved Sister Mary of Mercy from these cruel agonies.

On Monday the obsequies were conducted in the usual impressive manner, His Grace, the Archbishop, presiding in the Sanctuary, and her Reverend Brother, with deacon and sub-deacon chanting the Requiem service.  After the solemn Libera the remains of an edifying Sister of Charity were reverently placed in St. Mary’s Vault.

As a worthy commemoration of our departed Sister who toiled and prayed with us, let us lovingly implore our powerful Queen and Mother of Mercy, to release from the thralldom of imperfection, a soul truly devoted to her and place our loved Sister in bliss eternal, for great is the holiness of God!