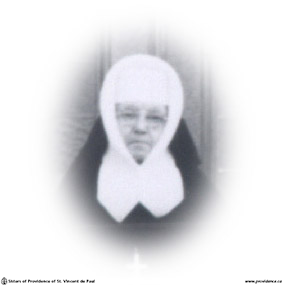 The Sisters of Providence, “Heathfield” lost their eldest member on May 9th when Sister Mary of Nazareth died at the Marian Infirmary. Sister was in her ninety-third year and the seventy-third of her religious life.

Born in the historic parish of St. Raphael’s, Glengarry County, the cradle of the church in Ontario, Catherine Isabel MacDonell attended the local elementary and secondary schools and taught for two years in a private school before entering the novitiate of the Sisters of Providence in 1894 along with her younger sister Mary Jane. The MacDonell sisters made profession in 1896, but Mary Jane (Sister Mary of the Assumption) died at the age of twenty-four after only six years in religious life.

Sister Mary of Nazareth resumed her teaching apostolate which she continued for forty years. She taught in the schools of Kingston, Perth, Belleville, Trenton, Prescott, Glen Nevis, Apple Hill and Gananoque, and fulfilled the office of Local Superior in the convents of Apple Hill, Tweed, and Arnprior.

The first few years of her retirement she spent at the House of Providence, visiting the aged and infirm, reading for and instructing them, writing their letters. In 1959 she came to the Motherhouse and was able to follow most of the community exercises until 1962 when a fracture of the hip necessitated her being sent to St. Mary’s of the Lake hospital. In spite of all the therapy she received there, she was never able to walk again. Her only complaint was that she was no longer to assist at the daily Mass.

As her strength gradually waned, she was brought back in 1965 to the Marian Infirmary so that she could spend her last days at the Motherhouse to which she was deeply attached. To the end she retained the use of her mental faculties and was able to receive Holy Communion the morning of her death.

Sister Mary of Nazareth’s keen intellect, unbounded energy and generosity, her sympathy with the suffering, and her loyal devotedness to Church and Community made her life a rich and rewarding one. The memory of children she prepared for first Holy Communion and of aged and poor whom she had instructed and consoled when they were to receive the Last Sacraments must have lighted up her own declining years.

Her funeral took place on May 11th when His Grace Archbishop Wilhelm with Monsignors Walsh and Lynett concelebrated Requiem Mass in the Chapel of the Immaculate Conception at Heathfield.

Sister Mary Eusebia of St. Mary’s School, Trenton, and Sister Teresa Kennedy, a Religious Hospitallier of St. Joseph, stationed in Ottawa, both nieces of Sister M. of Nazareth, were present for the funeral.  Another niece, Sister Mary Teresita, died at the Mother House just two months before Sister.