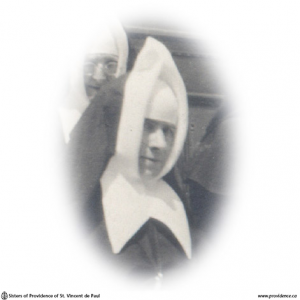 On Wednesday morning, May 25th, 1949, the Eve of the Ascension, Sister Mary of Providence (Helen Josephine Brady) died, at the House of Providence, Kingston, after a lingering illness.

On December 13, 1899, in early youth, Sister entered the Novitiate which was then located at the House of Providence. After she made profession in 1901, she trained as a nurse at St. Vincent de Paul Hospital, Brockville, and spent many years in the exercise of that profession at St. Vincent’s, and in St. Francis General Hospital, Smiths Falls. She was in charge of the x-ray department for some time in Brockville, but her health did not permit her to expend as much time and energy as she would, in hospital affairs. She never spared herself at any work to which she was appointed and was very generous and kind in her dealings with the aged poor and sick in the wards, always glad when she could bring any solace or comfort into their lives. Sister was charitable, prayerful, and pious, and true to her religious calling to the end.

On the Monday previous to her death, Sister, who was mostly confined to her room, slipped by her bedside quite accidentally causing a fatal fracture of the hip. Very little could be done on account of a weak heart from which she had suffered for many years. Consequently her sufferings were great and nothing seemed to give her any relief. Her only consolation was to have the Sisters recite the prayers and offer ejaculations, which she followed, being conscious to the last. She died about seven o’clock as Mass was finished.

Monsignor Nicholson, in the absence of His Grace now in Rome, sang the funeral Mass, on Friday morning. Father McGee presided at the graveside, reciting the prayers. Burial was at St. Mary’s Cemetery.