Sister Mary of the Cross Whelan 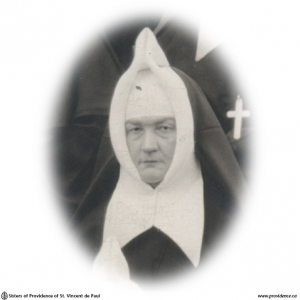 On January 10, 1936, Sister Mary of the Cross (Helen Frances Whelan) was called to her eternal reward at the House of Providence, Kingston.

Endowed with exceptional skill in the nursing profession, Sister spent the greater part of her life in St. Vincent de Paul Hospital, Brockville, where her name was held in loving benediction by a legion of poor and afflicted humanity.

Sister Mary of the Cross laboured unceasingly to acquire high spiritual standards. She attached great importance to value of time and observance of rule, and endeavoured to stamp each moment with eternal value.

For twelve years she served as Superior of the St. Vincent de Paul Hospital. Later she was elected as member of the General Council of this Community, which position she held until death. Her keen intuition and sound judgment were valuable assets to the Administration.