Sister Mary of the Most Precious Blood Gauthier 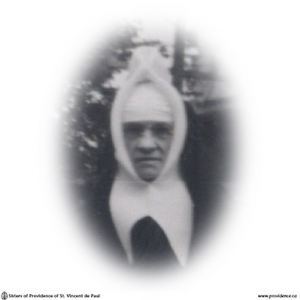 Sister Mary of the Precious Blood (Lilly Janet Gauthier) died here in the Marian Infirmary, Providence Mother House, “Heathfield” early Wednesday morning, April 4, 1962. Although in delicate health for many years Sister was able to be around and regularly at daily Mass until the morning of her death, which was rather sudden and unexpected.

At the age of twenty Sisters decided to give her young life to God in the religious state and on completion of her high school education at Point Clare, Quebec, she sought admission to the Sisters of Providence Community, Kingston, of which diocese her uncle, Most Reverend G.H. Gauthier, was then Archbishop.

She was born at 44 Kenyon, Alexandria Ontario, July 3, 1877, daughter of Mr. John N. Gauthier and Janet McKinnon of that locality. As a candidate, zealous for her perfection, Miss Gauthier was evidently a desirable subject, and as niece of the Archbishop must have been a very welcome addition to the Novitiate. Having completed the usual time allotted to the Novitiate, Sister made profession in 1899, and spent the following four years at the Mother House. During this time she became familiar with various works of the Institute, and displayed a special talent in music to which in later years she was to devote much of her time. She served for some years as assistant to the Mistress of Novices, and also on the missions of Brockville, Perth, Belleville, Glen Nevis, Prescott, Apple Hill, and Kingston where she was well known for her work with the children of St. Mary’s of the Lake Orphanage.

Sister Mary of the Precious Blood came to the Mother House in 1943 and at its opening in 1954 was admitted to the new Marian Infirmary. Sister occupied a room on the 1st floor where she would be near the chapel, which enabled her to freely attend Mass etc., as long as she was able to move around. Finally she became too weak to do much walking and gladly welcomed the change to a room on 2nd floor, which she did not occupy long. That same night, Sister died in the early morning, with scarcely time to call the priest who fortunately happened to be in the house and was on hand to administer the last anointing. Deo Gratias.

Although unable for active duty she had ever been a source of edification to young and old. A great sufferer, from a chronic head condition and almost completely deaf, Sister retained a clear mind and had her full mental faculties to the end. She was always alert for special Feasts of the Church, on which to begin the customary community Novenas, etc. with a note found in the Superior’s book to remind her of a particular day and of such a practice to be observed. It was her great privilege to celebrate the diamond jubilee of religious profession in 1959, and to have her brother Reverend C. Gauthier present on that occasion.

Reverend Father Gauthier celebrated the funeral Mass on Friday, April 6th. His Grace Archbishop O’Sullivan presided and sang the Libera. Three Monsignors and a number of priests attended the Mass. Burial took place in St. Mary’s Cemetery, with Father Gauthier at the grave reciting the prayers.