Sister Mary of the Presentation Kearney 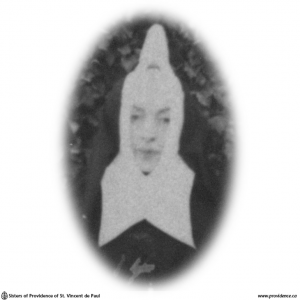 There passed from our midst on March 24, 1918, the soul of one of our most devoted members in the person of Sister Mary of the Presentation.

At her departure, no regrets or lamentations are expressed, on the contrary, a feeling of joy and peace pervades the atmosphere of the Community – a consolation that another of our number has happily reached the goal and will there plead most powerfully for those she has left behind.

This cherished daughter of St. Vincent de Paul, known in the world as Johanna Kearney, was born in Picton November 29th, 1846, of parents distinguished for their faith and piety. She entered religion November 29th, 1872, on the anniversary of her birth at the age of twenty-six years. Not blessed with a very robust constitution, she was not thought fitted for very laborious works, nevertheless she accomplished much, very much, for God and her Community by the faithful performance of the duties allotted to her.

Receiving the Holy Habit July 28th, 1873, she made her Religious Profession on the Feast of the Presentation, 1874, taking for her name this title of our Blessed Lady.

The mission of Holyoke having recently been opened, and an urgent request for increased help being received, our young Religious was chosen to make the sacrifice. Most willingly did she set off for that distant land in the company with her companion at Profession, Sister Mary Ignatius.

Here many difficulties and trials inherent to a new foundation awaited her, which she generously accepted, taking an active interest in all that concerned the welfare of the House. At first she was employed in teaching, later she was given charge of the orphans, which office she continued to supervise during the greater part of her sojourn at the mission. No doubt, to her lessons of piety and good example may be traced the many good lives of faith and rectitude, which have been observed.

When this mission was about to secede from the Mother House and the proposition being presented to remain or return home, our faithful Sister true to her Religious promises, could see no choice but to return to the Mother that nurtured her in her infancy. With the others of the faithful band, she arrived in Kingston during the annual retreat, August 1892, having spent 18 years on the mission.

After some time she was given the office of infirmarian, which she held until July, 1896, when at the General Election she was elected Third Assistant. She served a second term as General Assistant until July 1907. Now, she began to have periodical attacks of rheumatism which in 1913 threatened to become chronic. She made a pilgrimage to St. Anne de Beaupre that year in the hope of obtaining a cure, but without the desired effect and a few months later she was permanently confined to bed, a condition which lasted to the end, for a period of over four years. During this time the real sterling virtue of our Sister was manifest. Never did complaint escape her lips, though she had much to suffer. Most grateful was she for every service rendered.

She was favoured during her illness with many spiritual comforts and especially at the near approach of death. One of our annual retreats took place during that week and though she had made her final preparation for death a few weeks previous, the Reverend Director, Rev. J.C. Daly, S.J., of Ohio, who visited her frequently, thought well to administer the Last Sacraments a second time. After this she gradually sank, expiring on Palm Sunday morning, shortly after 5.30 a.m., surrounded by her Sisters, leaving them free to go and assist at the Mass offered for the repose of her soul by Rev. Father Duffus at six o’clock.

Her remains were placed in St. Mary’s vault and later were consigned to the cemetery.

Dear servant of God, faithful and true, obtain for us like you unswerving fidelity to the end.