Sister Mary of the Rosary Mangan 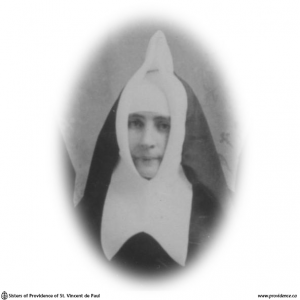 Oh, the Goodness and Providence of God! How admirable is His Mercy, how unsearchable His Ways!

When we see a large family of little children bereaved of their parents by death, we are, sometimes, tempted to say “What a deplorable loss! What will become of these little ones?” Overlooking the fact that the Provident Hand of God is over all things, that he foresees future events, and will provide and order all things sweetly to their advantage.

The members of the family from which our Sister came, were pretty well grown when their beloved Mother was taken from them. In that family, besides the parents, were three young girls and their brother. The mother, Mrs. Mangan, a sweet gentle woman, was everything to her children. They loved her dearly, and depended upon her for all things. When she was taken from them so suddenly, they were broken-hearted. How can they subsist without her? What shall they do? What will become of them? Thus they thought and reasoned.

But soon necessity obliged them to take up courage. They saw their dear father and brother needed consolation too, and also needed their care. The two younger girls returned to school, the older taking charge of the household duties. The youngest (now our Sister Mary Teresa), after graduating from the Public School, attended the Model School in Kingston, but before the term expired, feeling an attraction to the Convent life, asked and obtained her entrance into our Novitiate at the age of sixteen years.

Some years later the eldest sister (now Sister Mary Angel Guardian), following the bent of her inclinations, also procured her entrance into our Novitiate, leaving her place to her younger sister, (Catherine), the subject of our sketch.

The duty of the latter then appeared plain. She must stay in the home and take care of her aged father and brother. This she did faithfully and well for some years. Later, her brother marrying and settling in the home left her free to devote her life as she wished. In a few short weeks she too, asked and received her entrance into our Novitiate on May 4, 1891.

Manifesting an earnest, generous spirit from the beginning, she was advanced to the Holy Habit on Dec. 17th of the same year, and to Religious Profession on Aug. 1, 1893.

After this she was employed in the Mother House in the different offices, in the boarders’ department, kitchen, and for a few years had charge of the Cathedral Sacristy. She also took her part in the collecting each year. Prudent in her words and lay-like in her deportment, she gave general satisfaction.

In 1905, she was appointed Superior of St. Michael’s Convent, Belleville, an office which she held for four years until her appointment to a similar position in St. Peter’s Convent, Trenton, in February 1909.

Three years later in August 1912, she was recalled to the Mother House and given charge of the Chapel. At the end of six months, in February 1913, she was appointed to Maryvale Abbey, Glen Nevis as Mistress of Boarders. This office she held for seven years returning to the Mother House in September 1920. She was then given charge of the linen room, an office which she held until her strength began to fail early in 1931. She still gave assistance, sewing etc. until no longer able. She was confined to bed only a couple of weeks before her death, which came much earlier than was expected, on February 9, 1933. Becoming very restless, she was anointed a couple of weeks previous on Sunday January 29th. On Monday February 6, she seemed to go into a state of coma, from which she never awoke, passing away peacefully on Thursday at 8 p.m.

The funeral was held on Saturday February 11. Solemn Pontifical Mass was offered by His Excellency Most Rev. M.J. O’Brien assisted by Rev. Father Brady, Rev. Dr. Byrne and Rev. Father Martin. There were also present Rev. Father Hyland and Rev. Father Lesage. After the Mass His Excellency, gave a sermon appropriate to the occasion. The Pall Bearers were Sr. M. of Providence, Sr. M. Harold, Sr. M. Visitation and Sr. M. Hilary.

Of the family of six children, only two survived over time – Sister M. Angel Guardian and Sister M. Teresa.

The remains of our dear Sister were placed in the vault. May she rest in peace