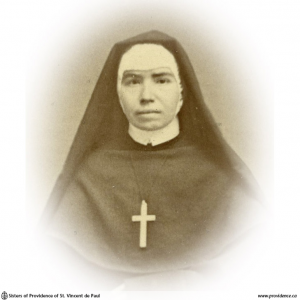 Sister Mary of the Sacred Heart was born in Wicklow County, Ireland, September 20, 1839 of worthy Catholic parents. Her family, whose name was Byrne, emigrated while she was still young and took up their residence in Quebec. There she lived for some years, the joy and solace of her parents and an example of piety, modesty, and gentleness to the entire household, but at length following a powerful attraction of her heart she asked and obtained admission into the Novitiate of the Grey Nuns in her adopted city. Full of hope she entered religion, for God had long since favored her with an ardent desire to serve Him in the religious state and particularly in a house devoted to the active works of charity: but she was doomed to disappointment for she left the Novitiate and returned home, after the lapse of a few months, on account of ill health.

Still she was not dismayed, but, with heart and affections estranged from the world, waited the manifestation of God’s holy will in her regard.

It may be thought that in a city so rich in religious Institutions as Quebec, she should easily have made choice of another Community, but having no inclination to learn the French language, her perseverance seemed to her more probable in an English speaking community.

At length her weary waiting was brought to a happy termination for hearing that Sisters of Charity had recently opened a Novitiate House in Kingston, she resolved to make another attempt to attain the great object of her prayers and desires. With the view then of becoming an humble and devoted servant of the poor, she broke asunder the tender links that bound her to home, bade a tearful adieu to her aged mother, relinquished the society of beloved sisters and brothers and came to Upper Canada, seeking a shrine where she might offer her young heart’s purest affections, a retreat where she might preserve the priceless pearl of her virginity and an asylum wherein to minister to the poor and suffering members of Jesus Christ.

She entered the Novitiate of the House of Providence in Kingston, November 6, 1864, being then twenty-five years of age, and in due time was permitted to receive the Religious Habit. The Community was soon convinced that the young Novice worked under the eyes of God alone and desired nothing more earnestly than her perfection.

With energy of body and affection of heart she applied herself to the different works of the Institute and embraced cheerfully all that would advance the interests of the Community which being young was still struggling and demanded great generosity on the part of its subjects.

While still a novice she was sent on mission to Belleville where she conducted herself with all that gravity and religious decorum which could be expected from a professed sister. Her time of probation having expired she made her profession on November 21, 1866.

No one could have a higher esteem for the religious life than Sister Mary of the Sacred Heart, consequently the holy peace and joy of her soul on being permitted to pronounce her vows was only surpassed when a few years later she, with holy resignation and touching confidence, yielded up her spirit to its Creator and went to receive the chaste embraces of the Spouse she had tenderly loved, and faithfully served during a life which though not long was certainly meritorious.

Soon after profession her health began to decline; she caught a severe cold in exercising the duties of her office which brought on a lingering consumption. During three years she supported silently and cheerfully the pains and lassitude of this harrowing disease. No word of complaint escaped her lips, but the hollow cough, the pale and sunken cheek, the attenuated form, told more plainly than words that death who had marked her for his own, would lay his icy hand upon her at no distant day.

It was in the different stages of this illness that her character and virtues were more distinctly seen. Ever affable and possessing a childlike simplicity of manner she preserved the same modest gayety throughout her long illness; was ready to compassionate all and forget her own pains in relieving those of others. She was always a rigid observer of holy poverty and this with her spirit of self-denial prompted her to partake of the common fare and to avoid these little indulgences and exemptions usually granted to those in declining health. She avoided losing a moment of time, and when no longer able to take part in the more laborious duties of the House, sought such as her strength permitted. An idea of her industry and zeal for the service of the poor may be gathered form the fact that she never yielded to her disease in so far as to desist from labor until the last month of her life, and this was not prompted by any undue attachment to exterior things but to her love of the duties of her calling. She had a very great desire to live longer, but seeing at length that it was hoping against hope she calmly resigned herself and directed all her attention to preparation for the awful moment of death. In the month of March she was seized with vomiting of blood, which was the immediate forerunner of her last illness. She desired that a novena be made to our Lady of the Sacred Heart and in compliance with her wish all the inmates of the Institution joined the sisters in their prayers; but it could only be by a miracle that strength could be given back to one whose vital parts were all but consumed by disease and God was not pleased to work that miracle, but the grace of perfect resignation to His Holy will was given her instead, for she expressed no desire to live from that time forth.

Daily she grew weaker and on the ever of the Feast of our Lady of Seven Dolors it was seen that death was close at hand. Though unable to join the other sisters in their retreat for the Renovation of Vows, still she was with them in spirit and ere the feast had dawned she had passed to eternity, we may confidently hope to the embrace of the Mother of Sorrows whose devout client she was. Her death was calm and peaceful, the sisters gathered around her while the Superior read the beautiful prayers of the church for the departing soul; conscious to the last she ceased not to recommend herself to God until deprived of utterance.

About ten o’clock on the night of the seventh of April 1870, the thread of life was severed, the weary months of suffering were brought to a close and the soul of our dear Sister Mary of the Sacred Heart was with its God. Purified by the pains of a tedious and harassing disease we may hope she made atonement for the weaknesses and imperfections of human nature and merited to enter speedily into the glory of the elect.

The funeral services were held in St. Mary’s Cathedral after which her remains were reverently consigned to the vault beneath the sacred edifice; but no member of the family assisted thereat, save her two sisters who at this time were professed members of the Community, for she earnestly requested that none, not even her mother, be informed of her illness or death until after the burial, knowing well that they would have hastened to her death bed, she wished to prevent all that would distract or prevent her giving all her attention to that great and important action which if well performed would crown with holy perseverance the labors of her life.