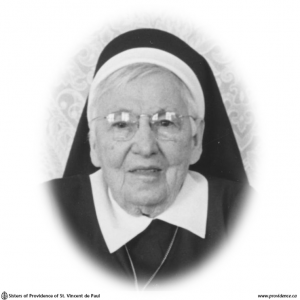 Mary Martha McKenna was born on June 6, 1888, at Burritts Rapids, Ontario. She was the last child of Thomas Christopher McKenna and Mary Ann Kenny. Having eight sisters and two brothers she belonged to the typically large family of those days homesteading in rural Ontario. Mrs. McKenna had been a teacher at the age of sixteen and six of her children, including Martha, took up the same profession.

After elementary school days at Dwyer Hill School, Martha completed Grade 12 at Smiths Falls High School and took her teacher’s training at Ottawa Teacher’s College. She taught two years in SS #10 Marlborough, and then moved to Ottawa in 1915. By September of that year she had decided “to give (her) life to God” as a religious Sister. Her sister, Cecelia, had already become a Grey Nun of the Sacred Heart, and another sister, Nora, was happily serving in the Congregation of St. Joseph. It is to Fr. John O’Gormon, pastor of Blessed Sacrament Church, on Fourth Avenue in Ottawa, that we owe gratitude for encouraging Martha to choose the Sisters of Charity of the House of Providence, for, according to his letter of recommendation, she was being urged by another religious to enter elsewhere, although she had already received her acceptance from Mother Mary Francis Regis.

Reception day at Kingston for Martha McKenna was September 22, 1915, and she took her first vows on August 27, 1917. From the beginning she loved life as a Sister. Her exuberance is very evident when she was accepted to renew her vows inn 1919. She wrote:

“The happy reception of Our Mistresses’ unexpected letter, with such gladsome news, made my novice heart go pit-a-pat….With such happiness do I recall my Reception and Holy Profession day, thinking how angelic is the human heart when given wholly to God, and how sad that the dross of material things must mingle with the divine. Here, I consider what a special privilege it is to be permitted to labour in our Lord’s vineyard.”

After profession she returned to the classroom and remained faithful to the challenging but rewarding work of teaching until the age of 70. During that time Sister Mary Sacred Heart, as she was called in religion, added to her qualifications by earning certificates in music, physical training, elocution and art. She was posted to several eastern Ontario centres including Smiths Falls, Belleville, Perth, and Trenton, with her longest stay – fifteen years – at Arnprior just prior to her retirement in 1960. Everywhere she enriched the lives of her students by her innovative and holistic approach. Although, at one time or another she had taught all grades, her ‘speciality’ was Grade 5. Her joy in nature, music and dance made learning a pleasant experience. Her family had been musical and Sister loved to sing, to play the piano and the harmonica. A caterpillar making his way to her arm was a “delight” to be spared and she did not hesitate to bring even “Mr. Goat” into the classroom to give her pupils a “hands-on-experience”. There was always a twinkle in her eye, even when she would recount the embarrassing conclusion of that lesson so that everyone could laugh with her at her naiveté.

The Sisters who lived with Sister Mary of the Sacred Heart, benefited from her out-going nature too. She had an eye for both inner and outer beauty and was not slow to affirm and encourage.

On her retirement from teaching, Sister served as sacristan in St. Mary’s Hospital, Montreal and St. Mary’s of the Lake Hospital, Kingston, until failing health brought her to the Marian Infirmary in 1973.

Through her less active years, Sister’s health gradually failed, but she was, as the saying goes, ‘made of good stuff’. Although in 1981 she suffered a fractured hip, in 1985 she survived a tumble down a flight of stairs without serious injury. At her death on September 8, 1988, she was one of two centenarians in the Sisters of Providence and she had spent seventy-two of her years in religious life.

Sister Mary of the Sacred Heart was the last of her immediate family, but she remained close to her nieces and nephews, in particular Sister Martha McKenna, who had followed her into the ‘Providence’, and was faithfully at her side in the illness of her last days.

The funeral Mass on September 12 at Providence Motherhouse was concelebrated by His Grace, Archbishop F.J. Spence, Msgr. J.G. Hanley, Rev. T. Raby, Rev. J. Rolzon and Rev. L. Byrne. In his homily the Archbishop skillfully and fittingly wove together the themes of wisdom in ripe old age, Martha’s words to Jesus, “I know you are the Resurrection”, and a grammar lesson, “Death is a coma, not a period in the sentence of Life.”  Sister Mary of the Sacred Heart was buried in St. Mary’s Cemetery, Kingston.

During her lifetime Sister “Sacred” particularly enjoyed the times when others would come to entertain, such as the New Year’s Eve celebrations in Arnprior, when the Oblate scholastics performed at the convent. One treasure we have is a letter she wrote at the age of 93 to “The Musicians and Vocalists of Kingston”. She thanks a group that came for an evening’s performance and goes on to say:

“There’s nothing like music and singing, and you make many happy hours come into the hearts of people, my own included. You are giving Kingston, Ontario, much enjoyment both instrumentally and vocally. Continue! I shall remember you all in prayer.”

We rejoice that Sister Mary of the Sacred Heart has gone on to the full bliss of heaven. From there she will surely encourage us all to give life our best effort, and, when our time comes, to go gently as she did to meet the God who has inspired us.