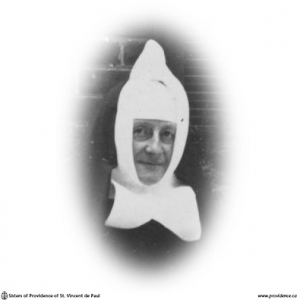 Sister was the former Mary Agatha McMahon of Chesterville. She entered the Novitiate, then located at the House of Providence, on October 1, 1903. In 1906 she made her religious profession, after which she went to St. Vincent de Paul Hospital, to take up nursing. She graduated as a nurse at St. Vincent’s and was Superintendent of Nurses there for many years. At various periods she was also local Superior at St. Vincent’s, St. Francis Hospital, Smiths Falls, Maryvale Abbey, Glen Nevis, Providence Shelter, Winnipeg, and Sacred Heart Convent, Arnprior.

Sister Mary Seven Dolors possessed an affable disposition and in her work which brought her in frequent contact with the public she readily made friends. She was a faithful religious at all times, beloved by her associates and a valued member of the community.

Surviving her are two of her sisters in the community, Sister M. Juliana and Sister Mary Henry.

Monsignor Nicholson of Belleville, in the absence of His Grace who was away in Rome, sang the Requiem Mass the morning of the funeral, which took place from the House of Providence Chapel, Saturday morning.

The remains were buried in St. Mary’s cemetery. Rev. Father O’Neill, rector of the Cathedral, officiating at the graveside.