Sister Mary of the Visitation Fahey 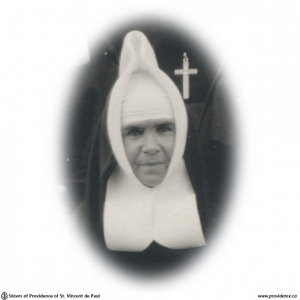 On Saturday night, October 25th, 1947, Sister Mary of the Visitation (Emmeline Fahey) died, after a short illness, at the House of Providence, Kingston.

Sister, who at the time of her death was the fourth senior member of the Community, died rather suddenly and unexpectedly. She had come from Smiths Falls more than a year previous and although in delicate health she was active to the last, attending daily Mass almost to the end. She had celebrated the Golden Jubilee of her religious profession the year before.

Sister was Sacristan for a number of years at St. Mary’s Cathedral and later, in the same capacity, at St. Francis Hospital. At this work which was “a labour of love” she was untiring in her devotion to duty, always finding something to occupy her in the sacristy or Chapel.

May her simple faith and love be satiated to the full in close proximity to her Divine Spouse in Heaven.