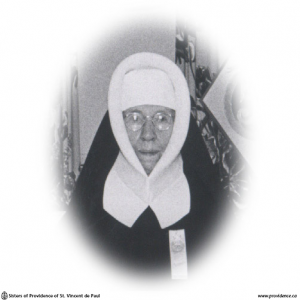 A devoted loyal member of the community for 58 years, Sister Mary Oswald went home to God on February 24, 1969, from the Marian Infirmary of the Motherhouse.

Born in Fallowfield, Ontario, in the diocese of Ottawa on May 18, 1884, Mary Ann was one of a family of eight born to Michael Moloughney and AnnTierney. On August 10, 1911, she made application to enter the novitiate of the Sisters of Providence, Kingston, and her pastor, Reverend J.T. Foley, sent the following recommendation: “I have much pleasure in certifying that Mary Moloughney belongs to a highly respectable family and her moral character is irreproachable.  She has given the matter of vocation to religious life serious and prayerful consideration and her going to the Novitiate has my hearty approval.” Mary Ann, who made profession in 1913 as Sister Mary Oswald, fulfilled the expectations of her pastor and her novitiate directors.

After pronouncing perpetual vows in 1915 she spent ten years on the western missions, training for a nurse at Providence Hospital, Moose Jaw and working in the hospitals of Camrose and Daysland. In 1925 she was transferred to St. Vincent de Paul Hospital, Brockville where she remained for eight years. In 1933 she was assigned once more to Providence hospital, Daysland, serving as Local Superior until 1939.

The next twenty-six years Sister devoted to the care of the sick and aged at the House of Providence. At the same time she served as Assistant to four Local Superiors, who spoke of her as “their treasure and comfort, a saintly Sister, showing a high degree of faith in and loyalty to her Community and her Superiors.” To her fellow-religious she was kind, sisterly, loved and admired for her prayerful, fervent religious life. The aged and sick idolized her as an efficient and sympathetic nurse, and moreover as a woman who commanded their respect and invited their confidence, and who they felt could not only ease their physical suffering, but also help them spiritually.

Years of service, however, took their toll on Sister Mary Oswald’s strength, her health declined noticeably, and in 1965 she retired to the Infirmary at the Motherhouse. Dread glaucoma against which she had been battling for some time gradually spread to both eyes, and for the last three years of her life she was totally blind. As she had edified all by her charitable ministrations during her active life, so now her patient endurance of pain and privation was a lesson to all.

On February 23 it was evident that her death was imminent, and Father Buckley, Chaplain, administered the last Sacraments at 4 p.m. The following morning just before Mass commenced, she breathed her last.

Her sister Mrs. Lillian Rooney of Ottawa, who had been faithful in visiting her during her lone period of illness, came at once and remained for the funeral. Another sister, Mrs. Kathleen Davis, of Montana sent a lengthy wire to Sister Mary Alban thanking the Community and Sister in particular for the care given to Sister Mary Oswald.

His Grace Archbishop Wilhelm concelebrated the funeral Mass with Monsignor A.J. Welsh and Father Buckley, and almost all the Sisters from the House of Providence attended.

Surely Sister Mary Oswald heard from her spouse whom she had served for fifty-eight years the words:

“Come ye blessed of my Father, take possession of the kingdom prepared for you…I was sick and your visited me.”