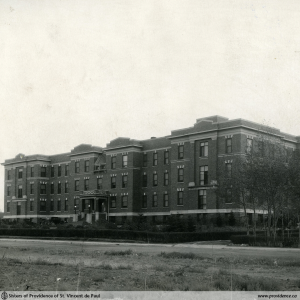 Sister Mary Oswin died suddenly on Sunday morning, May 21st at St. Vincent de Paul Hospital, Brockville. Sister had come for mass and before she reached the Chapel she became ill. The Sisters thinking it was one of her usual heart attacks, administered some remedies, but she asked to be anointed. The priest who came for Mass anointed Sister and before the Mass at which she intended to assist was over our dear Sister M. Oswin was in eternity.

Sister Mary Oswin (Nora Elizabeth Flanigan) was a native of Ogdensburg, N.Y., and the third member of her immediate family to enter religion. Two sisters; Sister M. Oswin and Sister M. Irene of the Gray Nuns Community, predeceased her.

Since her admission into the Community, November 2nd, 1914, Sister M. Oswin had devoted much of her religious life to the care of the aged poor at the House of Providence and the orphans at St. Mary’s of the Lake, Kingston. Not being of a robust constitution she was given light duties at other times, spent some years in Providence Hospital, Moose Jaw and finally St. Vincent de Paul Hospital, Brockville.

She possessed a cheerful, even disposition; she was charitable, kind and obliging which endeared her to her companions and associates. May her dear soul rest in peace.