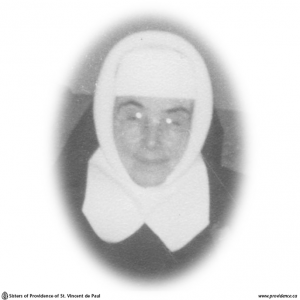 Mary Elizabeth Kinlin, a daughter of Stephen Kinlin and Ann Whalen, was born at Bogart, Ontario, the parish of Stoco on January 25, 1893, one of a family of seven, three of whom consecrated themselves to the service of God in religious life. With her sister Bridget, Mary Elizabeth entered the novitiate of the Sisters of Providence on December 8, 1912. The two sisters made profession on January 21, 1915, Bridget taking the name of Sister Mary Anna, and Mary Elizabeth that of Sister Mary Paschal. A brother William was ordained a priest for the archdiocese of Kingston in 1924.

Sister Mary Paschal’s talent was for the culinary art and she spent the whole of her active religious life looking after the diets of patients and Sisters, first in Providence Hospital, Moose Jaw, and then in St. Francis Hospital, Smiths Falls.

After forty years of such service, she was assigned the lighter duty of helping with the sewing at St. Francis’ and continued this work for another eleven years. In 1966 frequent attacks of illness obliged her to retire to the Infirmary at the Mother House. Here, as formerly on the missions, her calm, pleasant and kindly manner, her careful observance of community rules and her fidelity to her spiritual exercises made her a shining example of a fervent religious.

On February 19, 1969, Sister Anna Marie, nurse on duty on the hospital floor of the infirmary, had seen Sister before Mass, and when she returned to check the floor as Father Buckley, the chaplain, was bringing Holy Communion to the sick, shed found Sister Mary Paschal to all appearances dead. She summoned Our Mother General, and Sister Mary Alban, head infirmarian, and as soon as Father Buckley finished distributing Holy Communion, he anointed Sister. Whether there was still life no one could tell, but if not, she had just died.

Her remains were brought to the reception room at 7:30 p.m. and that evening and the following, a Bible vigil was spent by the assembled community and a number of Sister’s relatives from the Tweed area. One nephew, Mr. Stephen Kinlin, is an official at the Ontario Department of Education.

On February 21, His Grace Archbishop Wilhelm concelebrated the funeral Mass with Father Buckley and Father Feeney, P.P. of Erinsville, while Fathers Agnew, Clement and Shea were present. A nephew of Sister’s, Monsignor Peter Kinlin, who is Chancellor of the Archdiocese of Regina, wired from a hospital room in Regina that illness prevented him from coming to offer the funeral Mass.

Of the immediate family, only one brother survives, Mr. Stephen Kinlin of Oshawa. Sister Mary Anna died in 1946 and Father William Kinlin about a year later.

Sister Mary Paschal was one of those quiet, gentle souls, happy to exercise a hidden apostolate, and we trust that the God who sees in secret will reward her generously. May she rest in peace!