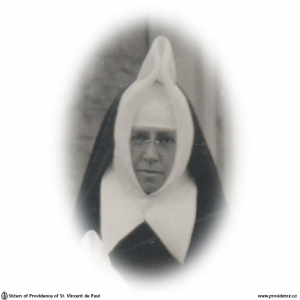 Sister Mary Patricia died on Sunday, January 16, 1955, at Providence Mother House, “Heathfield” Kingston. Her death was sudden, unexpected, and sad. Sister was found dead in the room she had occupied on the third floor of the Marian Infirmary wing since her return from Edmonton, September 15, 1954. The doctor and priest were summoned immediately but they could do nothing.

On the Friday previous, Sister had been to visit a relative at the Hotel Dieu. She was then apparently in good spirits and usual health. She had not remarked having a pain in her chest that day, but said nothing more nor did she report not being well at the infirmary. She stayed in her bedroom on Saturday and had her breakfast there and her dinner, but sent word that she did not want a tray or anything for supper. Sister frequently remained in her room for a day to rest without wishing to be disturbed, and for this reason it was not surprising or particularly alarming that she did not answer those who knocked on her door Sunday afternoon. But when Mother M. Alban made a second call on Sunday evening and received no answer, she entered the room. The sight that met her gaze was frightening. Sister had been dead several hours.

Sister Mary Patricia who was baptized Mary Frances Bradden was born at Brewers Mills, but lived with the family all her life in Kingston, receiving her education at Notre Dame Convent. She entered the Novitiate at the House of Providence in early youth, June 26, 1908, and made profession on August 30, 1910. Although her health was always precarious, she seldom allowed herself to be overcome by sickness. She was active, energetic, and ambitious – a good teacher with special talent for music. Sister taught over twenty years in the schools of the diocese, and though she was for ten years debarred from her favourite work, she maintained to the last an ardent desire to return to the classroom. Her enforced idleness was a heavy cross for her, but we hope and pray that the pious zeal and worthy ambitions motivating her desires to impart knowledge, have won for our dear Sister an everlasting blissful reward. R.I.P.

His Grace Archbishop O’Sullivan sang Pontifical Requiem Mass here on Tuesday for the repose of her soul. He was assisted by Msgr. Byrne and the Cathedral clergy. Father Shannon of Tweed was present at the Mass. After Mass the remains were left in the Chapel until the afternoon, as the grace was not ready sooner. Burial was in St. Mary’s cemetery at 2.30 p.m. Our Reverend chaplain, Father Flurey, recited the prayers at the graveside.

Several relatives, including her two sisters Mrs. Mallen and Miss A. Bradden, were present at the funeral.

Sister had spent forty six years in the community. May she rest in peace.