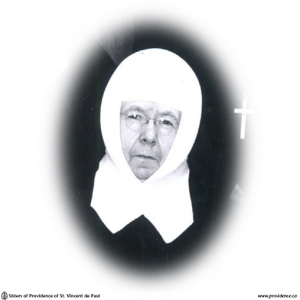 Mary Catherine, daughter of Francis Collins and Gertrude Mary Garry, was born on April 14, 1882, and baptized in St. Mark’s Church, Prescott, on May 20 of the same year. In 1905 she entered the novitiate of the Sisters of Providence, and after profession in 1908 was sent to help in St. Vincent de Paul Hospital, Brockville. In 1912 she left Brockville for Providence Hospital, Daysland, Alberta where for six years she ministered to the sick. She returned to Brockville in 1918 and spent nine more years at that hospital. From 1927 until 1936 she was stationed at the House of Providence, Kingston, during which time she gave assiduous care to Sister Mary of the Cross Whalen who was suffering from a severe mental illness.

In 1936 she was sent once again to Alberta and remained for the last thirty-two years of her life at St. Joseph’s Hospital, Edmonton.

In 1957 she visited the Motherhouse, “Heathfield” to observe with two of her companions the golden anniversary of their profession and in spite of her 75 years was able to enjoy not only the jubilee festivities, but as well a trip to St. Joseph’s Oratory, Montreal.

Her death occurred on April 3, 1968, and she was buried in the Sisters’ plot at St. Joachim’s Cemetery, Edmonton. She was the last of her immediate family. A sister, Sister Vincentia of the Institute of the Blessed Virgin of Dubuque, Iowa, was with her for her Golden Jubilee in 1957 but predeceased her by a few years.