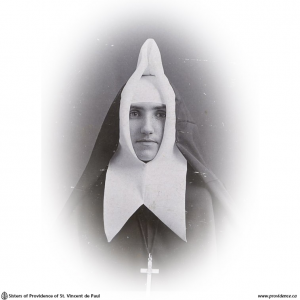 The “Death Record” of our Institute, at the close of its fortieth year, inscribes on the bead-roll of sanctified souls twenty-three cherished members who have joined the ranks of the blessed, and sadly is the now era prefaced by a loving tribute in memory of a fervent young religious, Sr. M. Patrick, who was called to her reward Feb. 17, 1902.

As the inheritance of worthy Catholic parents, Mary Agnes Donovan was endowed with a strong faith, the corner-stone on which was constructed a solidly virtuous life. Co. Cork, Ireland, was her birthplace and brightly glowed her enthusiasm when the departed glory or present wrongs of the “Green Isle” were related. For several years previous to her entrance into religion she lived in Lennox, Mass. And though mingling gaily in the world her heart was veritably marked with the insignia of religious vocation. At the age of twenty-one she bade adieu to her family and friends and obtained admission to the Novitiate July 1, 1891 and before the close of 1892 she was happily invested with the holy habit of a Sister of Charity.

In this little field of Christ’s vineyard she applied herself with resolution and ability to every appointed duty. Her kindness to the Orphans, the Aged and afflicted was simply incredible; in their immediate care her zeal found a fitting outlet while her patience in words and demeanour edified everyone.

The much coveted name of ‘Patrick’ she received at holy profession, feast of St. Charles 1893, at this period of her health gave promise of long and vigorous life, but He, Who appoints to each of us the measure of our days ordained otherwise.

The Community early recognized the superior qualities that characterized the youthful religious, her executive abilities, her aptness in writing, her almost scrupulous regard for the least important embassy entrusted to her charge and placed Sr. M. Patrick in the honourable but responsible position of Assistant, Secretary and Bursar of St. Vincent de Paul Hospital, Brockville. This appointment she ever regarded as a heavy cross but in all trying circumstances she was mindful of duty and gave her unremitting attention to the “one thing necessary.” If, in the busy scenes attendant on Hospital work she showed any natural irritability she would in a moment express her sorrow and ask forgiveness. She was accused of independence, yet none strove to promote a spirit of submission among her religious associates more earnestly than our worthy Sister, and no one who has followed her short career could ever say otherwise than she was insistent to a fault in upholding the rights of Superiors, a hater of pretence and sham and one who weighed all things in that balance which counts for the glory of God.

The Blessed Sacrament was always the chief object of her devotion and often in her trials, which were neither few nor light, was she seen hastening to cast herself at the foot of the Tabernacle in prayer. In an earnest but unaffected way did she strive to promote love and adoration for the Hidden God ever dwelling amongst us. Abundantly was this ardent zeal rewarded, for during her last illness the privilege of receiving Holy Communion frequently was one of her greatest consolations.

A malignant type of Typhoid fever during the summer of 1901 filled the Community with painful apprehensions and with reason, for it heralded the fatal disease Consumption which in less than eight months had ruthlessly cut down a promising young life. The month of September in the same year found her in the Infirmary at the Mother House preparing piously, yes, joyfully for admission to the Eternal Kingdom. A loving confidence in God sustained her courage to the close of her long and tedious illness. Many hours of weary suffering were brightened by frequent visits from our ever-kind Archbishop, the Most Rev. C.H. Gauthier, whose words of encouragement and unfailing sympathy inspired the dying religious with renewed hope. Being naturally bright and witty she had a smile and a cheerful word for all who came near her bed and rarely did she mention her own sufferings. Oh, well may it be recorded in this brief space that it is not for ability and intellectual gifts that Sr. M. Patrick will be longest remembered; her cheery disposition, her warmness of heart, her deep though unaffected piety and zeal for God’s glory, these are what endeared her to Superiors and Sisters in religion and those who were brought within the sphere of her influence, and which will doubtless secure for her, as a return of affection and gratitude, many a fervent prayer for the repose of her soul.