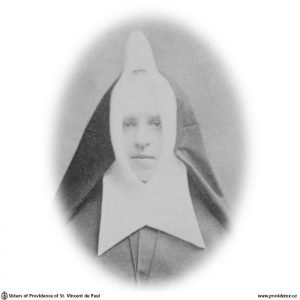 Sarah McKinley was born in Kingston, Ont., December 3, 1851, and on the 25th of March 1869, she entered the Providence Novitiate, being then eighteen years of age. Though not of a robust constitution she devoted herself generously to the service of the poor in the different offices assigned her by obedience. The usual time of probation was thus passed, and at its close she was admitted to the religious profession, taking the name, Sister Mary Patrick. Struggling still against physical weakness which seemed only to increase with time, she laboured cheerfully to bear her share of the burden, either of serving the poverty stricken or collecting means for their support. She went twice to the United States to collect of the new house and her energy in this trying work was admirable.

On the opening of the mission at Holyoke she was among the first to offer her services and was accepted. In this new field of labour many sacrifices, incidental to the opening of a house, were demanded, but Sister M. Patrick always testified that same generosity in the service of the poor, and laboured beyond her strength. Her health failing seriously she was recalled to the Mother House; but after remaining a few months she returned to Holyoke.

Being taken ill with typhoid fever she was brought to the last extremity, but after a long and tedious illness became convalescent, and returned again to Kingston.

Her health gave way completely, still she held the office of sacristan long after one of less endurance would have yielded to the demands of an enfeebled constitution. She possessed many amiable qualities, and acquired virtues during her religious life, which could not fail to edify all.

She had a tender love of holy purity, and this was to be seen in the modesty of her exterior. Her last illness was long and painful in the extreme, the stomach would retain no food and she lingered until so emaciated that disease seemed to have nothing to prey upon. On Easter Sunday the Angel of Death summoned her spirit and freed her from a life of suffering.

Fortified by the sacraments and all the consolations of holy church, she closed a religious career which though short was most worthy, and as we murmur a “Requiem aeternum” we cannot but rejoice in the firm belief that another of our number has persevered to the end, and really entered into eternal life.

Sister Mary Patrick died April 21, 1878, in the twenty-seventh year of her age, and the ninth of her religious life. We laid our dearly beloved one beside the other two departed sisters, in the Cathedral vault awaiting the resurrection when the “Corruptible will put on the incorruption,” and death will be exchanged for immortality.