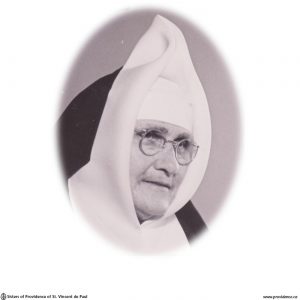 On Thursday, September 23rd, death claimed a veteran much-loved Sister of Providence. Sister Mary Paul, who was in the world Catherine Daughan, was born in Oswego, N.Y. on December 31, 1870. When she was nine years old her family moved to Canada, and her youth and early womanhood were spent in Perth, Ont. In 1898, she asked to be admitted to the Novitiate of the Sisters of Providence, Kingston, but illness in her family and especially the failing health of her mother prevented her from following at once what she believed to be the call of God. For eight years she performed faithfully and cheerfully her filial duty, still cherishing the hope of being, one day, able to consecrate herself to the immediate service of God in religious life. By 1906, after the deaths of a sister, a brother and her mother, she was free to follow her vocation, and with a sister three years her junior, was received into the novitiate.

In 1908 the two Sisters made profession, taking the names of Sister Mary Paul and Sister Mary de Sales. Both for well over forty years were exemplary religious.

Sister Mary Paul was a skilled needlewoman and spent a great many of her forty-eight years making the costume of the Sisters. Thus she came to know intimately most of the members of the Community from their early years. “I knew her well,” she would often say: “I made her holy habit.” She served also at Arnprior, St. Mary’s of the Lake, and a term as Superior at St. Michael’s Convent, Belleville.

For almost twenty years before her death she suffered from arthritis and was unable to go to the refectory for meals as she could not go up and down the stairs. But with the aid of a cane, she could walk to the Chapel and the Community Room and never missed a religious exercise or a recreation. Two years ago, the doctor saw that her heart was weakening, and advised her that the effort of walking more than just around her room was too much for her. Then she was provided with a wheel chair and until two weeks before death she was as faithful as ever at Mass and Community exercises.

The beginning of the end came rather suddenly. As she was taking her “cup of tea” at three o’clock on September 10th she was seized with a haemorrhage from the lung. She was anointed and was able to follow the prayers but was not able to leave her bed again. She lived for two weeks and suffered two more haemorrhages. But her mental faculties never failed, and she was able to receive Holy Communion right up to the day of her death. That morning we all noticed that she was much weaker, but she was bright and able to speak and able to pray until two in the afternoon. Then after a slight haemorrhage she lapsed into unconsciousness. Our chaplain came and prayed over her for an hour and Sisters were praying constantly at her bedside until 8.15 when she quietly breathed her last. It was the eve of the feast of Our Lady of Mercy, and we hope that Sister Mary Paul, who practised a more-than-ordinary devotion to the Rosary and the Scapular, was met at the gates of death by Our Blessed Mother.

His Grace Archbishop O’Sullivan sang Pontifical Requiem Mass, assisted by Msgr. Byrne and several of the city clergy. Two Fathers from Regiopolis and Father MacDonald, C.Ss.R. from Brockville were present. Burial was in Saint Mary’s cemetery.  Father Flurey recited the prayers at the graveside.