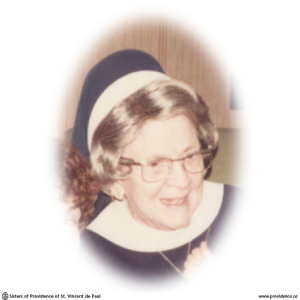 On March 29, 1983, which was Tuesday of Holy Week, Sister Mary Paula died at Hotel Dieu Hospital, Kingston, Ontario. The oldest member of the Community, Sister had observed on December 6, 1982, her ninety-sixth birthday, having a few months earlier, commenced her sixty-eighth year of religious life.

A resident at Providence Manor for the past eight years, she was remarkably active and mentally alert for one of her age, able to look after herself and be present with the Community for Mass, meals, and many of the recreational activities.

On March 18th, she got up quickly to answer the telephone, fell and fractured a hip. For ten days in hospital she endured the pain of surgery and its effects until on the morning of the 29th she passed peacefully away. Along with the nurses who were caring for her, Father B. McNally, chaplain of the hospital, Sister Wilhelmina O’Hearn, her Superior at Providence Manor, Sister Mary Teresa Cole and Sr. Inez Donovan, Councillors, and Sister Justine Hendrix, RHSJ, Hotel Dieu Pastoral Care Dept. were praying at her bedside.

Sister Mary Paula, known in the world as Anne Marie Sturgeon, was born in Sutton, P.Q., one of a family of six daughters and one son. Her father, Pierre Sturgeon was of French ancestry, and her mother, Bridget Eagelton, was from Ireland. The couple had lived in Massachusetts and the older children were born there, before the family came to Quebec.

Anne Marie entered the Novitiate at the House of Providence, Kingston, on September 6, 1915, and pronounced First Vows on December 29, 1917. She spent the first few years as a professed religious at St. Mary’s of the Lake, then an orphanage. She served in various capacities at Providence Hospital, Moose Jaw, St. John’s Convent, Perth, Providence Manor, Kingston, and for a few years as directress of resident students at Maryvale Abbey, Glen Nevis.

In 1947 she returned to her first mission – St. Mary’s of the Lake, now a hospital – where she remained for twenty-seven years. Until retirement from active duty in 1965 she supervised house-keeping in the Sisters’ quarters of the hospital and looked after the needs of the chaplains.

From early middle life she suffered from a painful stomach trouble and for many years was unable to follow regular community life. Because of a strict diet she took her meals by herself, and seldom joined her Sisters for prayer or recreation. In her later years her health seems to have improved to some extent and so, as mentioned earlier in this sketch, she was able to spend more time with her Sisters. As long as she was able to take care of her own needs, she preferred not to retire to the Marian Infirmary.

Because her death occurred in Holy Week and no funeral Mass could be offered during its last three days, her funeral took place on the day following her death at 6:45 in the evening. The burial was at 9:30 on Holy Thursday morning. This was the first time in the history of our Community that a funeral was held in the evening. Father Kenneth Stitt, chaplain of St. Mary’s of the Lake, was the main celebrant with Father Thomas Brady and Father Dan Ryan, chaplain at Heathfield as con-celebrants. His Grace, Archbishop F.J. Spence, offered the farewell prayers.

In his homily, Father Stitt spoke of Sisters’ hidden life, doing God’s will in the various missions assigned her. And this disposition was reflected in her last illness; when further surgery was suggested, she replied, “Whatever God wills.”

That Sister Mary Paula had exercised in her active life the charism of the Community – “a compassionate caring for God’s people” – was evidenced by three witnesses at the time of her death.

A woman, who with her husband, came for the wake and again for the funeral Mass, told us that when she was a very young child her mother had died and she, with her brothers and sisters, was placed at St. Mary’s of the lake Orphanage. “Sister Mary Paula,” she said, “was a mother to me.”

Another woman, who had been a resident student at Maryvale Abbey was Sister was housemother to the girls, sent a mass offering and wrote that she regretted that because of an attack of flu she was unable to attend the funeral. Sister Mary Paula, she said, had kept in touch with her over the years, and when she suffered bereavements by the death of two children and then of her husband, Sister had come to her home on each occasion to offer sympathy.

Father Thomas Brady, to show gratitude for Sister’s kindness to him while he was chaplain at St. Mary’s of the Lake Hospital, came from his parish in Enterprise to concelebrate her funeral Mass.

We trust that God had confirmed by His, “Well done!” these expressions of appreciation by His people whom Sister Mary Paula served.