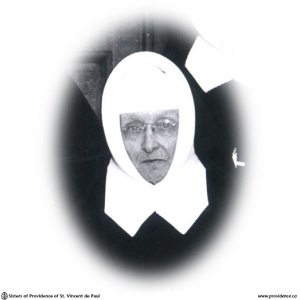 She had completed fifty-five years of religious life, and until three years ago was doing full-time duty in a classroom. She also served as local Superior in Chesterville, Lancaster, Arnprior, Gananoque and Perth. Last September she was appointed to St. Mark’s Convent, Prescott, and was active and apparently in good health until stricken with a heart-attack on Sunday, April 10th.

She was the last member of her immediate family. Two sisters, Sister M. Louise of this community, and Mrs. Ambrose Way of Tamworth, and one brother Bernard predeceased her. Several nieces and nephews from Tamworth and surrounding district attended the funeral.

Sister M. Pauline was an excellent religious and a devoted, loyal member of her Community. She endeared herself to all by her sincerity, charity and great kindness. Just one month before she died she made the March retreat here at the Mother House. It was noticed then that she would not allow herself the least privilege, as she might have at her age, even walking up the stairs when she could easily have taken the elevator. Three years ago Sister celebrated her golden jubilee of religious profession. Her virtuous life had been blessed with a long record of good works in the class-room and elsewhere. May her soul rest in peace!