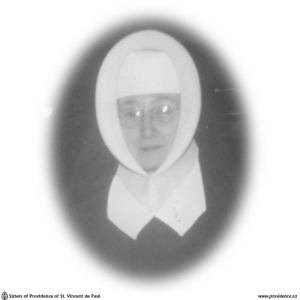 “There is frequently significance about the date on which a person is called by death.”  Monsignor J.G. Hanley spoke these words in his homily at the funeral Mass of Sister Mary Paulinus on September 18, 1981. This Sister of Providence of St. Vincent de Paul died at the Motherhouse Infirmary, Heathfield, Kingston, during the last hour of September 14, the feast of the Triumph of the Cross and the vigil of the feast of Our Mother of Sorrows. The latter feast is dear to the Sisters of Providence as it is the date on which they make annually a common renewal of their vows of religion. It was fitting, therefore, that Sister Mary Paulinus should as this day came, make her final oblation to God. And since the last years of her life involved a continual bearing of the cross, it was most suitable that she be released from it on the day when we celebrate Christ’s redemptive victory.

Monsignor Hanley traced an analogy between the life of Our Blessed Lady and that of Sister Mary Paulinus. As in the life of Our Lady, God’s will was revealed to her gradually, step by step, so Sister heard the voice of God calling her to three successive careers.

As a young girl, Helen Rashotte, after training in Christian living in a good Catholic home and in elementary and secondary education in the schools of her native village of Tweed, decided to enter the teaching profession. For three years she taught in a rural school, was happy in her work, regarding it not merely as a job but as a vocation to open the minds and hearts of little ones to truth.

But she heard a second call, an invitation to a closer intimacy with Our Lord, which she recognized as a vocation to religious life. So in 1933, she came to the novitiate of the Sisters of Providence and after the period of formation was assigned to her former chosen profession, but now as a religious teacher. For thirty years she devoted herself to teaching little children to know and love God, and especially to preparing them for the reception of the Sacraments of Penance and Holy Eucharist.

Then God sent a third vocation which was to draw her most closely to Him and to His Holy Mother, the vocation of suffering.

In 1965 she was obliged by ill-health to leave the classroom and retire to the Marian Infirmary. For four years she was able to be up and around, although her mind was not functioning normally. Her trouble was diagnosed by a specialist as “pre-senile dementia” for which treatment would be of no avail, and which would, in the course of a year, render her incapable of looking after herself.

The diagnosis proved correct. Sister Mary Paulinus spent the last twelve years of her life as a helpless invalid. She received every possible care from the Sisters and lay nurses of the Infirmary staff and spiritual help from the Motherhouse chaplains. As she could not communicate verbally, it was difficult to know how much physical and emotional suffering she was enduring. It was then surely significant that God should have called her to consummate the oblation along with Mary who stood silent, uniting her sacrifice to her Son’s on Calvary.

Sister Mary Paulinus was born in Tweed, a daughter of Paul Rashotte and Elizabeth Casey. Two brothers, Lawrence and Casey, as well as a sister-in-law, Marjorie Rashotte, all of Belleville, survive. A sister, Brigid, and a brother, Raphael, pre-deceased her.

Of Sister’s thirty-three years of teaching, she spent twenty-three years in St. John’s School, Kingston, where she is remembered as an excellent primary teacher and a fine principal. Besides her classroom duties during all those years, she, with Sister Mary Francesca (Kelly), devoted one night a week giving religious instruction to children who did not attend a Catholic school.

The funeral Mass was celebrated by Msgr. J.G. Hanley, Vicar General, in the absence of His Grace the Archbishop. Con-celebrants were father Dan McDonald of Tweed and Fr. Paul McAvoy (former chaplain of Heathfield) of Amherstview. Present also were Father M. Farrell, Monsignor Bernard Walsh and Father Don Clement and a large number of relatives, including cousins Sister Patricia Rashotte and Sister Gertrude Casey of Heathfield.

Sister Mary Paulinus will be remembered by her Sisters in the Congregation as a gentle, kindly religious whose life of prayer, work and suffering will be an inspiration to all striving to become ever closer to God.