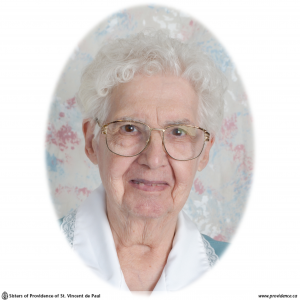 Mary Ellen McCarthy was born on November 21, 1919 the eldest of 7 children. She entered the Novitiate of the Sisters of Providence on February 12, 1941 and made profession on March 19, 1943. After her First Profession, she was missioned to the House of Providence, Kingston, then to Rosary Hall in Toronto. In April 1944, she went to St. Joseph’s Vocational School in Winnipeg as house mother to teenage boys. This was no easy task for her since she had no training in this field. Years later, one of the boys remarked to her that she was strict but fair. This gave Sister a sense that her work had not been in vain. For the next 4 years she did some nursing at the House of Providence in Kingston and at St. Vincent de Paul Home in Athabasca. In 1961, she took the Registered Nursing Assistant Course in Brockville. Upon graduation, she returned to Athabasca to nurse for two years. Then, she went to St. Vincent de Paul Hospital, Brockville for a year and to Moose Jaw to nurse. In 1967 she returned to the Motherhouse to take the Operating Room Technician Course at Hotel Dieu Hospital. She was then assigned to St. Francis Hospital, Smiths Falls for a year before going to St. Mary’s Hospital in Camrose to work in the operating room.

In 1978 when the retreat centre opened at the Motherhouse, she was sent there as the receptionist and did the bookings. In 1986 she enjoyed a sabbatical at Spokane, Washington, in the Credo Program. The following year she was named co-ordinator for the Sisters at St. Joseph’s Hospital in Edmonton for three years. During this time she was secretary for the Providence Health Team. In 1990 Sister returned to the Motherhouse where she helped with the switchboard and did chauffeuring for the Sisters.

Sister is predeceased by her parents, Daniel and Ellen (Waple) McCarthy, her brothers, Daniel, John and Bernard and sisters, Jo Ann Smith and Gertrude Donohue. Sister is survived by her sister, Catherine Ferguson of Lethbridge, Alberta.

The Mass of Christian Burial, held in the Chapel of Mary Mother of Compassion, Providence Motherhouse on April 7 was presided over by Friar Edward Debono, OFM Conv. Reverend Michael Reed delivered the homily. Other members of the clergy were also in attendance.