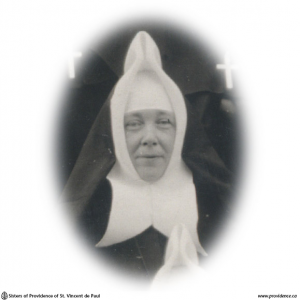 If a long life of patient suffering makes a saint, we have one more added to our list in eternity, D.V. Sister Mary Peter for well nigh fifty-five years a member of the Community, died at St. Vincent de Paul Hospital, Brockville on Thursday, May 29th, after an illness of more than thirty years.

Born in Mallorytown, Ont. she entered the Novitiate at the House of Providence, Kingston, in 1903 and made her religious profession in 1906.

In the years that followed, her good offices in the Community extended to the missions of Perth, Smiths Falls, Moose Jaw and Edmonton, where she discharged faithfully the duties assigned to her by her Superiors.

While in Edmonton she suffered a stroke and returned East in 1930. Since then Sister M. Peter has been a patient in St. Vincent de Paul Hospital, Brockville, spending herself in prayer and sacrifice on a bed of suffering for the good of souls. Sister celebrated her golden jubilee in 1956.

Of her three nieces in religion – two in Notre Dame Congregation and one in St. Joseph’s, Sister St. Michael of the Angels, C.N.D., and Sister Anna Marie, C.S.J., attended the funeral. Sister St. Peter, C.N.D. is in Japan.

The remains were removed from Brockville and brought to the Mother House on Friday and on Saturday morning His Grace Archbishop O’Sullivan offered Solemn Requiem Mass here in the chapel of the Immaculate Conception. He was assisted by the pastor from Brockville, Rev. A. O’Neill and clergy from St. Mary’s Cathedral.

Burial was in St. Mary’s Cemetery. The prayers at the grave were recited by Rev. Wm. Downey, assisted by Rev. Father T. Brady, R.I.P.