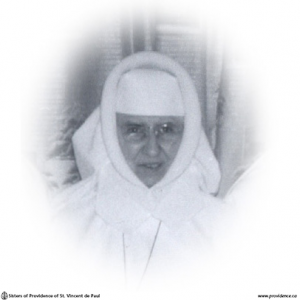 On February 18, 1983, God called to her eternal home another of our senior sisters, the second within two months. Sister Mary Lidwina died on August 22nd and now we record the death of Sister Mary Petronilla. Sister was ninety-four years of age and in the seventy-first year of her religious life.

Amelia Goulah (in her family circle Millie) was born on February 9, 1885, at Bogart, Ontario, a small village in the parish of Stoco, and was baptized on March 10, by the late Father John Fleming. Her parents, Francis Goulah and Harriett LeBarge, were French Canadians. During the early years of the nineteenth century many French families came from the province of Quebec to the Stoco-Tweed area, seeking land grants offered by the government of Upper Canada or employment in the lumber industry then flourishing in the region. These new settlers established thriving farming communities and were able after a few years to give a good education to at least to the younger members of their large families. Francis and Harriett Goulah’s children numbered ten.

Amelia, at the age of twenty-four heard the call of God to dedicate herself to Him as a religious, and on January 6, 1913 she was admitted to the Novitiate at the Sisters of Providence then located at St. Mary’s of the Lake. It is worthy of note that she was one of five young women from the parish of Stoco who joined that class of Providence novices – and all persevered. Two of the five are still living and active, Sister Mary Rose Whalen and Sister Mary Alban Hawkins.

Amelia, one of the older members of her family, had completed the ordinary elementary education available in rural districts. Her correspondence at the time of her entrance gives evidence of a keen, practical mind, a neat concise style and a remarkably fine handwriting.

After profession as Sister Mary Petronilla she was assigned to Providence Hospital, Moose Jaw, Saskatchewan, where she remained until time for final vows in 1917. Her letter from the hospital asking to be accepted for perpetual commitment expresses the ideal towards which she strove throughout her long active life. She wrote: “During the past two years since coming to Western Canada I realize more and more the privilege and the blessing of a religious vocation particularly in the work of saving souls, of bringing them back to God, where so much can be done in this country.”

She had many talents and she used them generously wherever there was need, in the health care institutions in the West, at Providence Manor, Kingston, and at Father Dowd Memorial Home in Montreal, and as housekeeper in teaching missions in Ontario. A consoling memory during her declining years in the infirmary was that she never objected to a task asked of her by a Superior. Her last assignment was to St. Vincent de Paul Hospital, Brockville, where she spent eleven years engaged in sewing.

For some time now her health had not been good, and in 1966 at the age of seventy-seven she retired to the Marian Infirmary. She was able for a few years to look after herself and follow the spiritual exercises of the community.

Her diversion was hockey on T.V. She was a real hockey fan, watched every game broadcast in daytime or early evening, knew all the teams and the stars, even received a hockey magazine.

But a dark cloud was looming up, her sight began to fail and gradually worsened until she was almost totally blind. At the same time her health problems became more serious. During her last year she was twice admitted to Hotel Dieu. Once surgery was necessary, and in spite of her advanced age she made a satisfactory recovery.

She did not know until she was in hospital that she was to undergo surgery, and she would not consent until Sister Muriel, Superior General, went to the hospital and gave her permission. Not prudence, to be sure, but what used to be called in our early spiritual books the obedience of faith.

Sister Mary Thrasilla, a retired teacher living at the Motherhouse, devoted much time to Sister, looking after her correspondence, reading for her and praying with her. Sister Thrasilla tells us that she usually had Sister lead the Rosary and other vocal prayers that she knew by heart, for she seemed to recite them with such faith and fervour.

In spite of such attention, the constant care of the nursing staff, and the frequent visits of her niece, Sister Florence Goulah, Sister was often lonely. Another complaint was that she was always cold. Whether this was a real physical condition, or an idiosyncrasy, it was difficult to know.

On the night of October 18 she suffered a cardio-respiratory attack and had expired before arriving at the hospital.

May the memory of Sister Mary Petronilla’s long life of generous service to God and to members of His Mystical Body be an inspiration to us as we strive to increase our faith, hope and love.