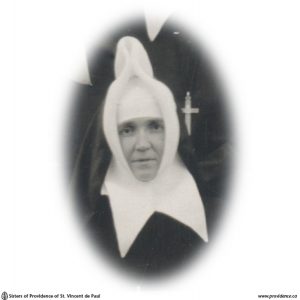 As Kathleen Allen at the age of eighteen she had left her home and family in Prescott, Ontario, to answer the call of Our Lord to dedicate her life to Him. Her parents – William Allen and Margaret McCrea – were life-long residents of Prescott, and their family of five sons and five daughters received their elementary education from our Sisters at St. Mark’s School.

So the Sisters of Providence were no strangers to Kathleen, and it was not too difficult for her to make the transition from a family of ten to one of twenty-two who made up the postulant class at Providence Motherhouse on March 19, 1915. But six months later she and her companions suffered a severe shock and loss at the death of their beloved Directress of Novitiate, Mother Mary Philip Murray.

In 1917, when her class pronounced first vows, Kathleen asked for and was given the religious name of her first Directress, and as Sister Mary Philip she entered upon her long life as a professed member of the Sisters of Providence of St. Vincent de Paul.

She spent a year at Maryvale Abbey, Glen Nevis, to complete her High School credits and a year at Ottawa Teachers’ College. Then, for almost forty years, she taught in various schools of Kingston Archdiocese. Her longest and last assignment – 12 years – was to the parish of St. John’s, Kingston, first to St. John’s School and later to St. Patrick’s.

During her years of teaching Sister was plagued by periods of ill health; from her early years she suffered from sinusitis, then thyroid trouble (which necessitated surgery) diabetes, and arthritis. In 1964 she retired to the Motherhouse, but kept busy for a few years in the library, before being admitted to the Infirmary.

In the fall of 1980 doctors discovered cancer so far advanced that no treatment would be of avail. Sister Mary Philip accepted the verdict with calm resignation and spent the remaining few months in preparation for death. Her frequent ejaculation was, “Into Your hands, O Lord, I commend my spirit.” Her sister, Mrs. Eileen Burey, an R.N., was with her for the last three or four weeks and was present along with the chaplain Father McAvoy, Sister Muriel Gallagher, Superior General, and several other Sisters when she passed quietly to God in the early hours of January 2.

Father Allen, as homilist, chose for Gospel reading “the Walk to Emmaus”. The two disciples, he said, were discouraged and gloomy, but the encounter with Jesus filled them with hope and joy which they took back with them to Jerusalem. Similarly, our encounter with Jesus as we walk the way of religious life will give us courage and hope to bring us, as we trust it has brought Sister Mary Philip, to our heavenly Jerusalem.

The only surviving member of Sister’s immediate family is Eileen (Mrs. Burey) mentioned above, who lives in New York. A second priest-nephew, Father Richard Allen, belongs to Sault Ste. Marie diocese, and a niece, Sister Allen, a member of the Sisters of Service, is working in the Canadian West. Another nephew and a niece from Grand Rapids, Michigan, were able to attend the funeral.

During her active life, Sister Mary Philip was a resourceful, versatile person with talents for art, needlework and cooking and was generous in using these skills to assist her Sisters in the school or in her convent home. That she was an esteemed and loved teacher was evidenced by a letter from a former pupil, Mrs. Nancy (Quattrocchi) Salvador, excerpts of which follow:

“I was shaken to hear yesterday at Mass of the passing of Sister Mary Philip, and want to tell you how much she meant to me. “She was one of my favorite teachers, Grades 4-7 at St. Patrick’s School. She was a strict disciplinarian but believed in fun with learning and often declared Friday afternoon as Fun and Games Time. She joined our games of ball and bingo – with holy cards as prizes. She had many of us going to Mass daily as members of her Mass Club. She had great expectations of me and I loved her. I am making my New Year resolution for 1981 one of her favorite sayings, “See good, Say good,” and I am going to share it with my children.”

We hope that Sister Mary Philip’s influence will continue as well in other families and that she has merited the reward promised in Daniel 11:3, “They that instruct many to justice shall shine as stars for all eternity.”