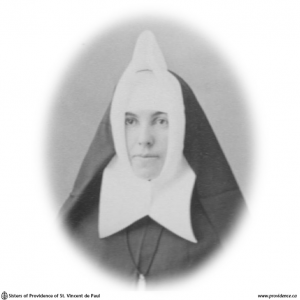 On that fine autumn morning of Sept. 28, 1915, as the convent bell rang out its clear notes bidding us arise, adore and praise our God, little did we dream that ere the dial marked the hour of noon, one of our number who was like us hastening to the place of prayer, would have passed to her eternal reward, would be numbered with the dead. But such was to be the case. Our cherished Sister Mother Mary Philip, Mistress of Novices, will be summoned from this world to give an account of her stewardship.

Our Sister was at Mass, at Holy Communion, at breakfast with the Community, as was her wont; then went to her duties. No more was noted until half past ten o’clock. A Sister came from the Novitiate to Mother Assistant in great distress, crying that she feared her Mistress was dead, that she had sent her on a message, and on her return found her on the floor, apparently lifeless. The alarm was sounded Father Duffus, the resident priest, was called all hurriedly to the place, expecting to find that she had fainted or met with an accident, but no, our dear Sister has truly gone from us, she was really dead. O what grief, what sorrow filled our hearts! We ask ourselves again and again the cause. O why was she taken from us?  We can ill afford to lose one so good, so true. The affliction of her devoted Novices was truly heartrending. The doctor arrives and judges that there is no need for further examination. She shows all the symptoms of heart malady. We at once communicate the sad news to our Mother General who is visiting in the mission of Arnprior. What a surprise she receives. She came by next train bringing Sister M. Dominic, sister of the deceased, with her from Smiths Falls.

Though bewailing our loss, we console ourselves with the remembrance of her goodness if one of us was to be called she was the fittest to answer the message, as her confessor remarked when viewing her remains “She never seemed to lose the remembrance of the presence of God.”

A brief sketch of her life, Elizabeth Murray, as she was known in the world, was born in Marmora, Ont., of Irish Catholic parents, on Mar. 3, 1859. From her childhood she was singularly remarked, manifesting a wisdom and piety above that of children of her age. She received her early education in their public school, and later attended the high school in Belleville. Obtaining a certificate, she spent three years teaching in the immediate vicinity of her home. But this passing of her life did not satisfy her noble aspirations. She longed to be free from the distractions of the world, to be where she could live and devote herself exclusively to God alone.

An occasion presented itself our Sisters came to her parish on their annual collecting tour. She spoke with them, heard of their life, and at once felt inspired to forsake all and follow their example. She came to Kingston, entered our Novitiate Feb. 28th. 1883, and from the first day she devoted herself in all earnestness to the one thing necessary, viz. to obtain a knowledge of the duties and to acquire the virtues proper to the Religious life.

Receiving the Holy Habit at the end of nine months, she was admitted to Profession May 30, 1885. Having finished her term of four years in the Novitiate, she was sent to the mission of Holyoke, Mass. May 10, 1887. She was given charge of the highest class in the parochial school, then under the supervision of our Sisters. Here was ample scope for her zeal. She had a large class of grown up boys. At first, she experienced great difficulty, being wholly unacquainted with the system of education and the text books in use there. But, by prayer and perseverance, she overcame all difficulties, and at length saw her efforts crowned with success. Her pupils went forth to different avocations, a credit to themselves and to the school in which they were educated. Not a few were called to the service of the Altar, and no doubt cherished with gratitude the memory of her who contributed not a little by her prayers and labours to their exalted dignity.

But now a trial which proves to be a heavy one is looming up before our dear Sister. The possibility of this mission separating from the parent house, which as first was but a vapour, is assuming a definite character. Her opinion has been sought and outside influence brought to bear on her decision. She has now been four years on the mission, and feels that she is in her proper sphere where she can accomplish much for God, for her own soul and for her Community, for at the Mother House up to this time the work of teaching had not yet been assumed. While in this dilemma, the order comes to her from her Superior General to return immediately to Kingston. She obeys the summons without demur, but not with the same childlike confidence which was characteristic of her; there is a doubt, a perplexity hovering over her mind. She reaches home Sept. 17, 1891, and though she conforms to everything that is required of her, she never sees her duty clearly, not recovers her former peace of soul until making her Annual Retreat, August 1892. How grateful she was to God ever after for the grace and light bestowed upon her during these days of retreat.

As we said before, the work of teaching had not as yet been taken up in this diocese, but how little we can discern of the future. A separate school was opened in Perth in December of the same year, and our Community was asked to assume charge. Here then was the field to which our Sister was called. The mission was opened. She was given the highest or Entrance Class. How carefully and zealously she devoted herself anew to her labours. The unprecedented results of her pupils at the Entrance Examination year after year bear witness

After spending fourteen years on this mission she was at the General Assembly held July 1907, elected fourth General Assistant, but owing to the taking of a new mission at Arnprior, she was obliged to teach one of the classes for the first year, also acting as Local Superior of the mission. For the remainder of the term she resided at the Mother House, but because of the scarcity of teachers, she had to still continue taking one of the classes at St. John’s School. Here again she distinguished herself by her indefatigable labours, especially in her efforts to reclaim careless, indifferent pupils, and instruct them for their First Communion and Confirmation.

At the close of her first term of office she was re-elected Third Assistant, and was also appointed to the office of Mistress of Novices, made vacant by the failing health of Mother Mary of the Sacred Heart. As in the past, she now applied herself with renewed ardour and zeal to accomplish her duties. But the responsibility inseparable from the office weighed heavily upon her. In her humility she considered herself unequal to the task, though her superiors and others fully recognized her ability and worth.

She died at her post of duty as she would wish, (Sept.28th. 1915). It would seem from little remarks she passed, that it was not wholly unexpected, that she seem to have a foreboding that such was near.

Solemn Requiem Mass was celebrated by Most. Rev. M.J. Spratt, Archbishop, assisted by Rev. J.F. Kehoe, and Rev. A.J. Hanly, at which a large number of the Clergy were present.

The funeral took place on Thursday the 30th. Her aged mother, two sisters and brother came from Marmora the day before to be in attendance.

Adieu, dear Sister! we pray that you will not for get the Community you loved so well, but continue to intercede for us until happily you see us all re-united with you in  praising God for all eternity.