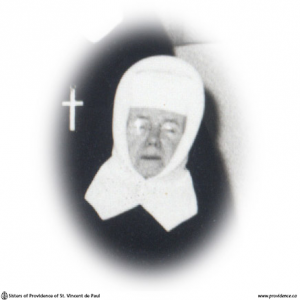 For the first time in the history of the Sisters of Providence a double funeral took place at the Motherhouse, “Heathfield” Kingston. On March eighth, within a few hours, two Sisters were called by death – Sister Mary Pius, a venerable religious, who had spent fifty-seven years in the community, the last ten in a sick bed, and Sister Mary Teresita who had been on active duty until three days before her death.

Sister Mary Pius (Mary Catherine Ennis) was born in the parish of St. James, Dublin, and entered the Novitiate of the Sisters of Providence from the well-known Benada Abbey, County Sligo, Eire, where she was a teacher of music and dramatics.

After profession in 1912 she taught music at various convents of the community and was especially remembered in Prescott and Chesterville where she spent long terms. Her work of predilection, however, was with the children of St. Mary’s of the Lake Orphanage, and the plays and operettas for which she trained the little ones delighted many a Kingston audience.

When St. Mary’s became a hospital in 1946, she returned there, performing light duties until stricken with paralysis in 1957. She was cared for in the hospital until 1964 when she was transferred to the Motherhouse infirmary.