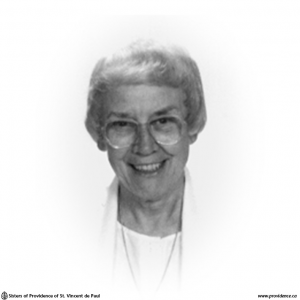 Mary was born in Perth Ontario, to Francis and Mary Eva (Young), the third oldest in a family of six boys. She grew up in a loving family on a small from on the outskirts of Perth. Her mother was the core of the family, hard working and loving. She gave the children a solid foundation in religion and Christian ideals. The nightly rosary was part of the daily schedule. Her father was a man of great integrity and honesty and instilled these qualities in the children. He was a lover of the outdoors and he included Mary and her brothers in fishing and hunting excursions.

Mary received her elementary school education from the Sisters of Providence at St. John’s Separate School, Perth, and her secondary school education at the Perth Collegiate Institute. She entered the business field following graduation, where she spent twelve years doing general office work and then became private secretary to the sales manager of the Henry K. Wampole & Company Limited in Perth, Ontario.

Mary entered the Novitiate of the Sisters of Providence of St. Vincent de Paul in August 1948. Her first appointment following her profession of vows was assistant to the General Treasurer, Sister Mary Roberta, and chief accountant at the Motherhouse as well as the organist. After spending sixteen years in this ministry, her move to St. Francis General Hospital in Smiths Falls was a traumatic event for her. She spent the next nine years at the hospital as purchasing agent, accountant, business manager and secretary treasurer. During this time she assumed responsibility for the financing of a building expansion program.

The hospital field was a whole new world for Sister, where she came to appreciate the apostolate of the suffering and sick and the loneliness of the aged. Her dealings with a staff of twelve people taught her a great deal about communication, tolerance and consideration of others.

In 1975 Sister Mary became the Superior and Administrator of St. Joseph’s vocational School in Winnipeg. The following three years were difficult for her since this was her first experience with children and especially emotionally disturbed ones. However, community life here was happy and supportive.

After completing a sabbatical year in religious studies at Gonzaga University in Spokane, Washington, in 1979, Sister Mary became the pastoral assistant in her home parish of St. John the Baptist, Perth, Ontario. As well as working in pastoral care, she served as the secretary, accountant and organist for the 11:00 a.m. Sunday Mass and for funerals. She also served as an auditor for the Kingston Archdiocese Marriage Tribunal for twelve years.

Sister Mary was compelled to resign her position as pastoral assistant due to a fractured femur in 1989. After her recovery she was able to resume some parish duties as various needs arose. In semi-retirement, Sister Mary became Eucharistic Minister to the sick, visited the sick in the hospital and in their homes, was Coordinator of the Pastoral Care Committee, was involved in prayer ministry, a Scriptural Prayer Group as well as organist for the 11:00 a.m. Sunday Mass. She was the contact Sister for the Associates in Perth, annalist and gardener at the convent.

Sister is survived by her brothers, Joseph (Frances) and Arthur (Evelyn). She will be fondly remembered by her many relatives and friends and by the members of her religious congregation.

The Mass of Christian Burial, held in the Chapel of Mary Mother of Compassion, Providence Motherhouse on August 23rd was presided over by Most Reverend Francis J. Spence, Archbishop Emeritus, assisted by several members of the clergy. Rev. William Steacy, CSsR in his homily commented on how, whenever there was a need in the parish, she responded because she cared. Sister Mary was much loved by her Congregation, family and parish family at Perth.