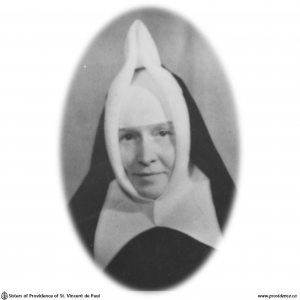 As a young Sister she went to St. Francis General Hospital, Smiths Falls, then to Providence Hospital, Moose Jaw. She was Superior for some time at Camrose and Smiths Falls. Her health was not good so she was given lighter work. She was placed in charge of the infirmary for the children at St. Joseph’s Vocational School, Winnipeg. Her health improving she was sent to Camrose. Sister had been engaged in regular duty in the hospital until a few days previous to her final illness.

She had expressed a wish to come east, hoping after a rest and change that she would be able to regain her health and resume hospital duty. It was arranged that Sister and her companion would leave for Kingston. However a telegram arrived, stating that Sister M. Pulcheria was unable to travel. Next day her condition being serious, she was anointed, and a telegram received during the night, announced her death.

She was a religious of sterling worth and her edifying example was an inspiration and support to all.