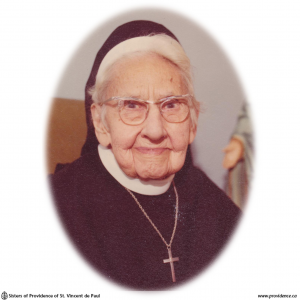 On November 11, 1979 the senior member of the Sisters of providence of St. Vincent de Paul, Kingston, was called to her eternal home. Sister Mary Raphael is the only one of the Community so far to have reached the century mark. Five days before her death she could tell her nurses that it was her birthday – the 102nd.

A daughter of Thomas McCann and Lucy Gabourie, she was born at Tweed, Ontario, on November 6, 1877, and baptized Mary Stella.

In 1903 she was admitted to the Novitiate of the Sisters of Providence and after Profession in 1905 was sent to train as a nurse at St. Vincent de Paul Hospital, Brockville, remaining on the staff there for a few years.

In 1910 she was appointed Local Superior of the newly-opened Novitiate and orphanage at St. Mary’s of the Lake, Kingston.

In 1914 she went to the Canadian West which was to be her field of labour for almost half a century. After three years in Daysland, Alberta, she joined the staff of Providence Hospital, Moose Jaw, Saskatchewan in 1917, a few months after the erection of the first building on its present site. Immediately she established the School of Nursing which she directed for 16 years.

In 1933 she received an appointment to the East for 3 years and then spent another two years in Daysland before returning to Moose Jaw. Here she was to remain until her retirement to the Motherhouse in 1964. She had dedicated to Providence Hospital, Moose Jaw, a total of 42 years service. Besides as director of the Nursing Service (1917-1933) she had acted as a floor supervisor 1938-1958.

For her last six years, she was a pioneer in pastoral work, the hospital’s “official hostess”, visiting the patients, supplying them with reading material, praying with them, consoling them and their families.

When she left the hospital, the city papers contained many tributes to her. Just two from the Times Herald, September, 1964:

“When Sister Mary Raphael stole away from Moose Jaw this week, she took with her the respect and esteem of thousands of citizens of this city and southern Saskatchewan. She was the ministering angel who made the acquaintance of patients soon after their arrival, and by her kindly smile and words of encouragement she created bonds of friendship.”

“Her semi-retirement started in 1958. Since this time the ill have come to know Sister as a kind face, a comforting smile and a happy conversationalist.  She could recall with ease many patients’ parents and grandparents.”

In addition to her contribution to Providence Hospital Sister gave leadership in other areas.  When the former St. Andrew’s Boys’ College was purchased by the Community in 1938 to serve as a home for the aged, she was given the task of supervising renovations and putting the building in order, thus commencing her career in geriatric care.

She also made a mark in the Saskatchewan Registered Nurses’ Association. In the early years of the Association, she was appointed to the Council, and in 1929 served as first chairman of the Nursing Education session. For her efforts in this organization, the S.R.N.A. in 1960 after her retirement from active nursing made her an honorary member.

Another honour was paid her in 1976 when a section of Providence Hospital had been converted into an extended Care Unit to accommodate long-term patients.  The unit was named Raphael Wing and a commemorative plaque and a large photo of Sister, taken in the Motherhouse Infirmary in her 100th year, were unveiled at the official opening.

On coming to the Motherhouse, she was for the first year or so lonely for her countless friends she left in Moose Jaw, and she eagerly read the newspaper articles sent her which kept her in touch with these friends. But gradually her sight became impaired; then her constant companion, apart from the Sisters who visited her – and especially Sister Mary Catherine Dooley, who had lived with her for many years at Providence Hospital – was Our Lady, whose rosary was seldom out of her hands.

So she patiently and quietly waited for God to call her home. The lay nurses on the floor loved her and were inspired by her.  (Perhaps this was the last and best lesson of the former Instructress of Nurses.) Until a few days before she died she was able to assist at Mass in her wheel chair, although she frequently fell asleep and had to be awakened to receive Holy Communion.

On the night of November 10th, Sister Gracia Whalen was on duty and at 4:00 a.m. she noticed that Sister was sinking. She summoned Sister Margaret Rose and Father McAvoy, chaplain, and as they prayed Sister M. Raphael slipped peacefully away.

His Grace, Archbishop Wilhelm, with Father McAvoy and Father Dan Ryan, concelebrated the Funeral Mass. Present also were Monsignor Walsh of St. Joseph’s, Father Clement of Holy Family and Father Price of the Cathedral, who gave the homily.

Immediate relatives who survive are two nieces – Sister M. Anita Collins, S.P., of St. Mary’s of the Lake, and Sister Margaret Collins of the Poor Clare Community at Vancouver; and a nephew, Charles Collins of Toronto. Sister Joan of Arc, S.P., of Heathfield, and Sister Carmel Hopkins, R.H.S.J., of Amherstview, are cousins.