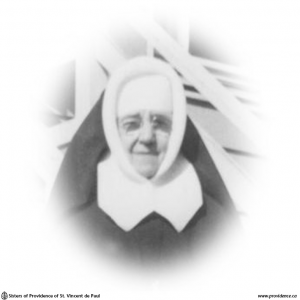 On February 27, 1967, the Sisters of Providence lost one of their venerable members when Sister Mary Raymond died at Hotel Dieu Hospital after an illness of six weeks. The former Caroline Moore was born in the parish of Chrysler, Ontario, and entered the novitiate of the House of Providence from the parish of Chesterville in 1908, and made profession in 1910.

Her whole active life of forty-nine years was spent in the care of the sick and the aged at the House of Providence, Kingston, and the hospitals of Daysland, and Edmonton in Alberta and Moose Jaw, Saskatchewan.

A patient at the Marian Infirmary of the Motherhouse for the past nine years, Sister suffered from impaired vision but was mentally alert and until her last illness of six weeks was interested in all Community activities.

Solemn funeral Mass was offered in the Chapel of the Immaculate Conception, Heathfield, on March second, by Monsignor W. Lynett, assisted by Father R.J. Flurey, Chaplain of the Motherhouse and Father W. Murphy of St. Mary’s Cathedral.