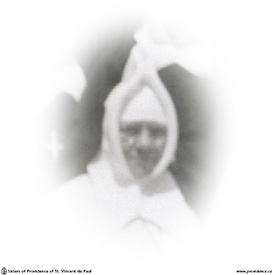 Sister was a native of Quebec City. She entered the Providence Novitiate, Kingston, in 1915 and made her religious profession in 1917.

In delicate health she returned to Kingston, and engaged in light duties according to her strength, but the change and rest did not have the desired effect. Operations and x-ray treatments followed but only gave temporary relief. Her condition which became gradually worse was a cause of much suffering, but she bore it patiently and resigned to the end. An exemplary religious at all times, we may believe that she made every moment on the cross of suffering a means of merit and future eternal glory.

His Grace, Archbishop O’Sullivan sang Pontifical Requiem mass, assisted by the Rector and clergy of the Cathedral. Two sisters and a niece were present.