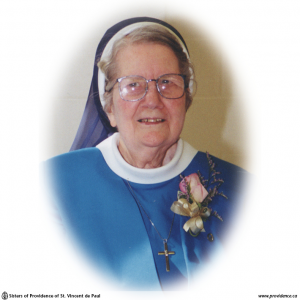 Sister Mary Regina Kelly was called home unexpectedly to her loving God on March 25, 2012 at Providence Motherhouse, Kingston, Ontario. She was born in London, Ontario on November 6, 1922 the eldest of 8 children of Katherine McDonald and Thomas Farrell Kelly. Her family moved to Brockville shortly after she was born and a few years later they moved to Syracuse, N.Y.

She entered the novitiate of the Sisters of Providence of St. Vincent de Paul, Kingston on February 4, 1950. Following her First Profession she was assigned to the infirmary at the House of Providence to care for the sick Sisters. She went to the Motherhouse when the infirmary was moved there about a year later. She spent a couple of years as housekeeper in the convents in Perth and Montreal then returned to Kingston to St. Mary’s Orphanage, Heathfield Villa to be in charge of the boys and the Day Nursery.

In 1964 she was assigned to the Motherhouse laundry where she remained until ill health no longer permitted her to continue. She endured much suffering during the time that she was visited with cancer, and was never known to complain. She was a quiet unassuming prayerful person who loved her volunteer ministry of knitting for newborns and those in need. She enjoyed watching sports, playing cards, listening to music and chatting one on one.

The Mass of Christian Burial, held in the Chapel of Mary Mother of Compassion, Providence Motherhouse on March 29, was presided over by Most Rev. Brendan M. O’Brien, Archbishop of Kingston assisted by members of the clergy. Friar Ed Debono, OFM Conv., was the homilist.