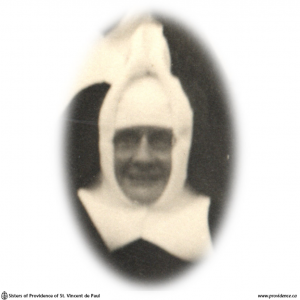 Sister Mary Regina died after a few hours illness at St. Mark’s Convent, Prescott, on Monday morning, February 27, 1950. Sister had been in her usual health, assisted at Mass and received Holy Communion, that morning. About ten o’clock she became ill. The priest and doctor were summoned but her condition was serious and the last Sacraments were administered. She was conscious and made a devout preparation for death.

Sister was a native of Glengarry, and entered the Novitiate, September 1898. After she made profession and went on the missions, her work was chiefly teaching music. She had charge of the choir and church music for a number of years in Perth, also in Glen Nevis, and Prescott. She spent some time at Maryvale Abbey, as local Superior, the Father Dowd Memorial Home, and finally at Prescott until her death.

Sister M. Regina had been a faithful religious all through her life. At the close, God would seem to be giving this good soul a measure of reward in death which was blessed with His own Divine Presence in the reception of Holy Viaticum, and the presence of priest and Sisters assisting by their prayers.

Just three weeks before, grieving and sorrowful, Sister M. Regina was here for the funeral of Mother M. Victoria, her former Superior at Prescott. Now, they are re-united, we trust, in an eternal bond of happiness forever in Heaven.