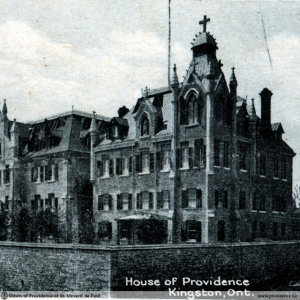 The subject of this brief biographical sketch, Miss Mary Ellen Quinn, known in religion as Sister Mary Regina, was born in Glengarry, Ont., on Sept. 4, 1867 of very respectable parents and educated in Williamstown under the tutorship of the good Sisters of the Congregation de Notre Dame.  The loss of a loved Mother in her infancy deprived Mary Ellen of a large share of that tender solicitude and affection, which childhood claims as its portion. In some measure, however, this want was supplied by a kind-hearted step-Mother, who devoted herself earnestly to forming her little charge to a life truly Christian and useful. Under the edifying influence such guidance, Miss Quinn early learned the all-important lesson, that true happiness is to be found only in God’s service; penetrated with this conviction she determined to renounce the vain maxims of the world, and to embrace a life of perfection.

Acting on the advice of her enlightened Director and with the hearty approval of her good parents, she obtained entrance to the Providence Novitiate May 17, 1887.  Earnestly and with much simplicity, she gave her whole attention to the religious instruction of her Superiors, under whose spiritual direction our little postulant was easily formed in the school of the Divine Master, to ardent zeal, tender and generous affection and forgetfulness of self.

After a probation of ten months in the postulate, the holy habit was received with great joy July 1, 1888. The more laborious works of the Institute were now accepted and performed with amiability and unwearied patience by the dear young Novice, who began thus early to prepare for holy profession, which would irrevocably unite her to Jesus her Divine Spouse. Supreme happiness filled the heart of our ardent aspirant, when she was permitted to pronounce her religious vows on Jan. 7, 1890, receiving the name of Sister Mary Regina.

Passing over several years of good and faithful service in the various works of charity and especially among the orphan girls, who had always the foremost place in her affectionate heart, we come to her labors in St. Vincent de Paul Hospital, Brockville, where her engaging manners, thoughtfulness, intelligence and aptitude for household management rendered her necessary to this establishment.

It is consoling to record the testimony of her worthy Superior, who declared that during the three years of her missionary life, the slight defects of character evinced from time to time by our good Sister, were well over-balanced by her genial disposition and her genuine interest in all that concerned the general welfare of the Community, and it may be said that owing to her tact and cordiality many friends were brought to the Hospital.

Ever lively and entertaining at recreation she was regarded on the mission as a sunbeam, for her childlike gaiety dispelled the ennui and shadows of the day’s contradictions and toils, often was she sent to spend a half-hour with a poor patient, to brighten and cheer a depressed heart.  It is worthy of note that her own cheerfulness was seldom dulled by the acute rheumatic pains to which she was subject and which eventually terminated in serious pulmonary disease.  In the autumn of 1897, our cherished Sister’s health began visibly to fail, violent attacks of coughing were rapidly and cruelly immolating its victim. Still she continued on the thorny path of labor and suffering until October 1898, when her condition necessitated her removal to the Mother House. She was placed under the immediate care of our kind Infirmarian, and it was gaily remarked by our dear little invalid that she came to the Mother House to prepare to die religiously.  In less than a month the rapid and life-destroyer, consumption, had so reduced her strength that  it was with difficulty that Sister was conveyed from the Infirmary to the Church gallery to assist at the grand ceremony of the Dedication of our new church, Nov. 21, 1898

During her illness, she frequently invited her religious companions who visited her at the Infirmary, to read a chapter of the “Imitation” or to recite some short prayers for which she had a special devotion.  She enjoyed the happy privilege of receiving Holy Communion frequently and she longed for this heavenly favor, finding in the Eucharist all her strength, all her consolation. Towards the end of her illness she was honored by several visits from our venerated Archbishop, Most Rev. C. H. Gauthier, whose expressions of lively sympathy and paternal tenderness seemed to assuage all the anxieties of our dying Sister, a consolation she fully appreciated, often testifying her joy and gratitude for this privilege.

In order to sustain and encourage our desolate Sister in her last struggling hours, it was deemed expedient to summon the Confessor and have Extreme Unction administered a second time, as three months had nearly elapsed since the first anointing. This was on Wednesday February 1 and scarcely had the pure young soul received the Holy Viaticum when she recovered peace and great tranquility, yet her sufferings were acute. Soon her death agony began but she possessed all her mental faculties to the end. She frequently called for holy water and kept united to God by holy aspirations. Contrary to all expectations our dear Sister survived until 4 o’clock the following afternoon, when surround by the Community, Sister Mary Regina peacefully and lovingly yielded her soul to God, in the thirty-second year of her age and the twelfth of her religious life.  Privileged soul, the lovely month of our Blessed Mother Mary brought you into the sanctum of holy religious, where with childlike simplicity and generosity you served Him among the chosen ones of His sacred keeping, and today, the feast of the Purification, our Virgin Mother presents you to her Divine Son pleading your helplessness and begging entrance to that blessed eternity which has no bounds, no limits but its immensity!

The funeral and solemn service for our dear young Sister was the first chanted in our new Church, and the impressiveness of the ceremony was increased by the presence of our honoured Archbishop, who gave a last benediction over the remains of the much lamented and well beloved Sister Mary Regina.