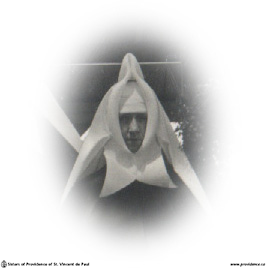 After leaving the Novitiate, Sister spent some time at Rosary Hall, Edmonton, and at Providence Shelter and St. Joseph’s Vocational School, Winnipeg, Man.

When Sister became ill she was sent to Providence Hospital, Moose Jaw. Here she remained an invalid, practically all the time, until her death of cancer. She suffered a great deal during her long illness, and this she believed was in answer to her prayer that she might get her purgatory in this life. She was so emaciated towards the last, from the ravages of disease that it would be hard to imagine anyone in her condition living as long as she did. She retained consciousness to the last and her death was most peaceful.