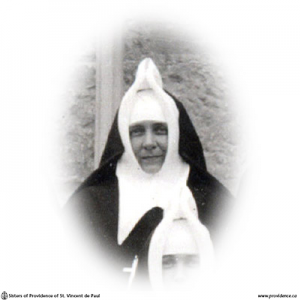 Sister Mary Rita, daughter of Bernard Farrelly and Elizabeth Walker Farrelly, was born at Kingston Mills on April 7, 1889 and baptized at St. Mary’s Cathedral, Kingston on May 12, 1889.

After elementary and junior High School she took a business course and on March 1, 1907 entered the Novitiate of the Sisters of Providence. After profession she completed her high school and graduated from Ottawa Teachers’ College. Then for over forty years she taught in various schools of the archdiocese: Brockville, Trenton, Belleville, Perth and Gananoque. She was for three years in St. Mary’s School, Kingston and her last assignment was at St. John’s, Kingston where she spent sixteen years.

In 1954 she was superannuated and retired to the Marian Infirmary at Heathfield. In spite of many illnesses, including cataract operations on both eyes, she remained fairly active and keenly interested in community projects until October 1970. In that month she underwent serious surgery for cancer of the oesophagus.

During the last nineteen months of her life, although she must have been suffering a great deal, no one ever heard her complain, and her good humour made her the marvel and the delight of doctors and nurses. To all who visited her either in hospital or in infirmary her comment was “Everyone is so good to me”. Her mental faculties were alert until a few hours before her death on Trinity Sunday, May 28th.

For several days she had been quite low, and because of her throat condition she could take very little nourishment. Throughout the day of the 28th Sisters were praying almost continuously at her bedside, and she followed the prayers. In the evening most of the community were assembled in the auditorium to hear a piano recital by Sister Monique’s pupils. Just before its close a message came from the infirmary that Sister Mary Rita had slipped quietly off to eternity.

The funeral Mass on May 31st was concelebrated by His Grace Archbishop Wilhelm, Father Buckley and Father Agnew. Monsignor Farrell, Monsignor Walsh and Father Clement were present.

She was the last of her immediate family of five, three girls and two boys. A sister-in-law, Mrs. Dorothy Farrelly, lives in Kingston with her six nieces and nephews.

Sister Mary Rita will be remembered for her special care for the poor among her pupils, and her cheerful endurance of long years of suffering.